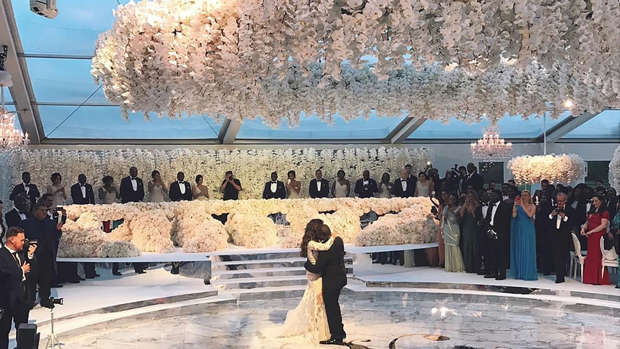 His mother is one of the world's richest businesswomen so it's little surprise that Folarin Alakija's wedding was a lavish, no-expense-spared, fairytale affair.

Folarin, who is one of 66-year-old oil tycoon Folorunsho Alakija's four sons, married Iranian beauty Nazanin Jafarian Ghaissarifar in an extravagant bash at Blenheim Palace in Oxfordshire over the weekend, which is estimated to have cost around £5 million ($8.8m), the Daily Mail reports

The father-of-one, who is in his late 30s and lost his first wife to cancer, tied the knot to his stunning wife in front of friends, family and celebrities, including Victoria's Secret Angel, Shanina Shaik.

While Folarin makes his money as an entrepreneur, investor and cinematographer, it's his mother who has an estimated fortune of US$2.1 billion ($2.92b). Forbes ranked her as the 14th richest person in Africa but the richest woman in the country. She is number 80 on its Global Power Women list and overtook Oprah Winfrey as the richest woman of African descent in the world in 2014.

It is thought hundreds of close friends and family members were flown over from Nigeria and were no doubt put up in a lavish hotel for the weekend.

The Woodstock venue, which is the ancestral home of Sir Winston Churchill, was kitted out with one million white roses, a lavish cake decorated with hundreds of ornate roses and even hosted pop star Robin Thicke at an estimated cost of £150,000 ($263,800).

According to the venue's website, the cost of hiring the whole venue is on application but hiring just the palace and state rooms costs £33,000 ($58,036).

Searcys are the approved caterer for the Orangery at Blenheim palace and three course meals start at £52 ($91) per head - excluding alcohol - but it's believed they had a much more expensive bespoke package. Guests dined on delicious food, such as barley wafers with cheddar custard and chive yoghurt dip, crispy duck egg and Wiltshire truffle.

The breathtaking flowers were the work of Jeff Leatham, who is known for his elaborate decorating of the Kardashian's homes. 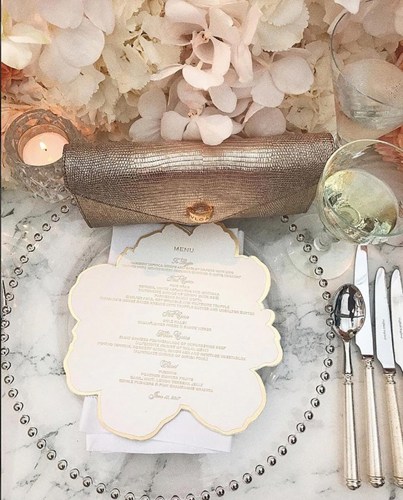 Bringing over 30 staff members to the UK for the ceremony, Jeff adorned every inch of the venue with copious amounts of roses and white orchids.

Jeff, who can command up to £250,000 ($439,600) for flowers, has worked for Madonna, Oprah and Tina Turner. He was also the man behind the flowers at Eva Longoria and Tony Parker's wedding.

Guests were also treated to a surprise performance from Robin Thicke, who would have been flown over from the US, as well as a magnificent firework display in the hotel grounds later in the evening.

Folarin's new wife, who once dated Rob Kardashian, studied Bioengineering and Biomedical Engineering at the University of Manchester, has a graduate Diploma in Law and has also worked as a model and marketing consultant. 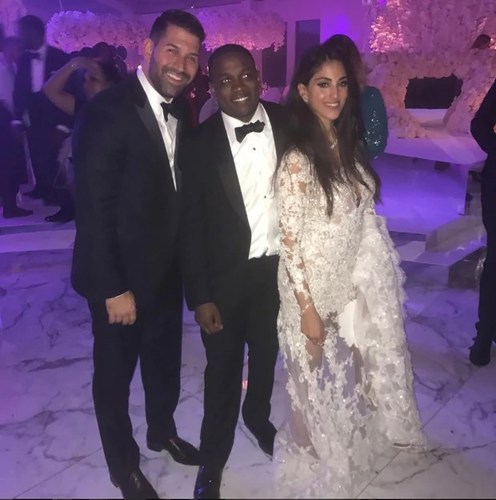 The stunning brunette is the daughter of businessman Mr. Khosro and Mrs Nooshin Ghaissarifar, who are from Iran. It is believed that Naz, as she is known among her circle, was born in Iran and lived in London in her youth before moving to Manchester to study.

She has also spent time in Los Angeles, where much of her modelling work was based, and regularly mingled with celebrities, including the Kardashians.

Folarin, who studied Geography at Imperial College, London, was previously married to a lady named Chena, with whom he had a daughter. She tragically lost her life to cancer six years ago. It is believed that Folarin met Naz through friends in London. 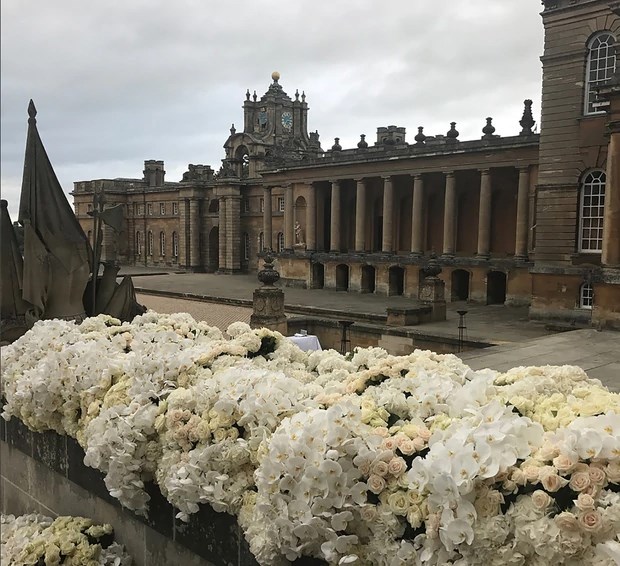 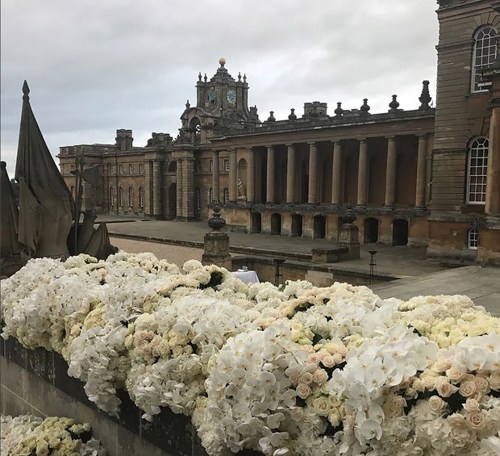 The new Mrs Alakija has previously featured in a campaign for Monkee Jeans, an organic denim brand, and dated Rob Kardashian in 2013.

She stunned in a traditional strapless white gown with lace embellishment as she was walked down the aisle by her father. She accessorised her look with a dazzling diamond necklace and white Manolo Blahniks.

She later changed into a racier, floor length white gown with sheer panelling. Beaming before her friends and family, she let her hair down as she danced the night away with her new husband and glamorous wedding guests.

The pair became engaged last year and had a traditional Nigerian wedding in Lagos in November. 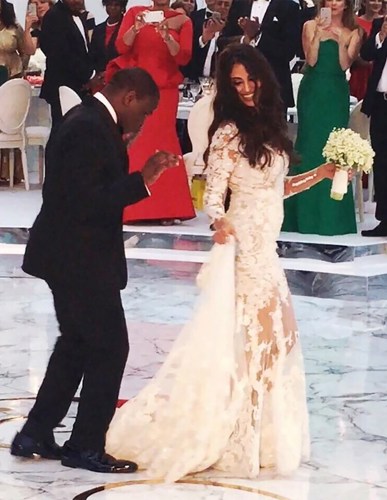 The cake, which was adorned with hundreds of roses and ornate doves, was created by Elizabeth's Cake Emporium. Elizabeth's clients include British, European and Middle Eastern Royalty, celebrities and high net worth individuals.

With eight tiers on their cake, topped with elaborate iced flowers and doves, it is estimated that their cake could have cost up to £10,000 ($17,500).

Elizabeth is also the only three times winner of The Great Cake Bake, a show which featured the best wedding cake makers in the country.

The event was planned by Sade Awe of The Bridal Circle. Sade's impeccable taste and selective eye for the exquisite make her a trusted resource for an elite clientele and luxury partners alike so it was little surprise she was called upon. 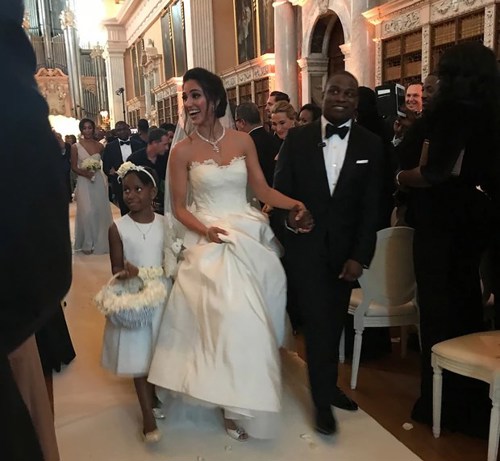 Other famous faces at the event included Starboy Records artist Mr Eazi and Nigerian fashion blogger Temi Otedola, who were recently revealed to be dating.

Hamish Shepard of Bridebook.co.uk, said: "The preparations and construction of their custom clear marquee, including a bespoke marble floor with their gold initials, would have required up to a week of exclusive hire of the Palace, with the cost of the marquee on top.

"The spectacular endless flowers by Jeff Leatham are likely to have cost at least £200,000. With food and drink, Robin Thicke (at $263,800) and all the other items for the big day, including the dress, on top, the wedding will have no doubt cost more than £1m ($1.76m) and potentially several million more."