She's the heir to the glittering Swarovski gemstone empire so, naturally, Victoria Swarovski's wedding was a dazzling affair.

The 23-year-old, who is also a famous singer in Austria, married property investment boyfriend, Werner Mürz, who is thought to be in his 40s, over the weekend in Trieste, Italy, in a show-stopping three-day bash, the Daily Mail reports. The crystal heiress stunned in a 46kg custom-made gown that she designed herself with the help of Dubai-based designer, Michael Cinco, whose celebrity clients include Beyoncé, Jennifer Lopez, Rihanna and Lady Gaga. The gown reportedly cost over £700,000 ($1.3 million) and came embellished with 500,000 Swarovski crystals, paillettes and laser-cut flowers.

She offset her stunning tulle and lace designer dress, which came with an eight-metre veil and train, with Jimmy Choo heels.

The couple, who met in 2010, said their vows in the Cathedral of San Giusto in front of 250 of their closest friends and family - and stretched the festivities over three days in the Italian sun with three outfit changes for the bride.

They kicked off the luxurious weekend with a "pasta and love" welcome dinner at The Piazetta at the Falisia Resort and Spa the night before the wedding and hosted a "farewell brunch" the day after the wedding ceremony.

Victoria, who was born in Innsbruck, Austria and famously sang the theme song of The Chronicles Of Narnia: The Voyage Of The Dawn Treader and won the German version of Dancing With The Stars in 2016, was walked down the aisle by her father, Paul Swarovski, who works for the family's crystal company along with hundreds of his family members.

The reception took place 20km from the church at the lavish five-star resort of Hotel Falisia in Portopiccolo. The family and friends enjoyed breakfast at Max's restaurant surrounded by herb trees trimmed into the shape of hearts. The venue was, of course, decorated with thousands of Swarovski crystals by event designer Sabine Königsberger.

The couple, who got engaged last May, had a lavish five-tier wedding cake and enjoyed a spectacular firework display in between dancing the night away.

On the Saturday morning after the ceremony, the guests attended a farewell brunch with the newlyweds at the Beach Club in Portopiccolo.

Victoria's mother, Alexandra, is a journalist and her father, Paul, works for the family business. Model Sarah Brandtner added some glamour to the guestlist, whilst Pharma entrepreneur Willi Beier and rapper Kay One were also at the event.

The evening event had a red and white theme and Victoria plumped for a red couture Michael Cinco crystallized red high-low gown for the bash - and the designer shared a stunning video of her donning the design on Instagram.

Dress designer Michael Cinco is one of the most lauded designers and has dressed the likes of Mariah Carey and Jennifer Lopez.

The couple are currently enjoying a lavish honeymoon around France. The heiress has been keeping her 132,000 Instagram followers up-to-date with her trip and snaps show her relaxing on a superyacht and shopping at Dior in St. Tropez.

Swarovski was founded in 1895 by the glass sander Daniel Swarovski and his mechanically cut gemstones became highly sought-after.

By 1976, when the company had been handed down through the generations, the Crystal Objects arm was established.

The company started by selling crystal figures and sculptor and then launched jewellery, glasses and souvenirs. 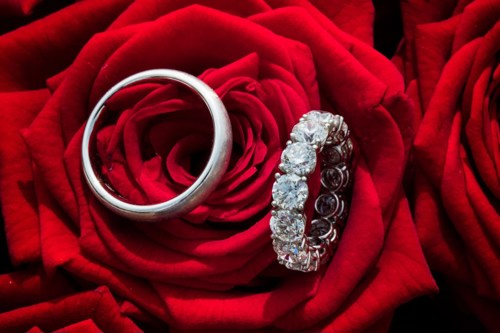 The company started supplying their crystals to other brands, including fashion houses, lighting companies and interior giants.

They have also launched a perfume brand with the Clarins Fragrance Group and sponsors the Christmas tree in the Zurich train station hall and the star on the tree in the Rockefeller Center in New York.

They have also sponsored the British Fashion Awards and had the likes of Miranda Kerr, Karlie Kloss and Ruby Rose model for the brand.

The company group is owned by around 200 family members.