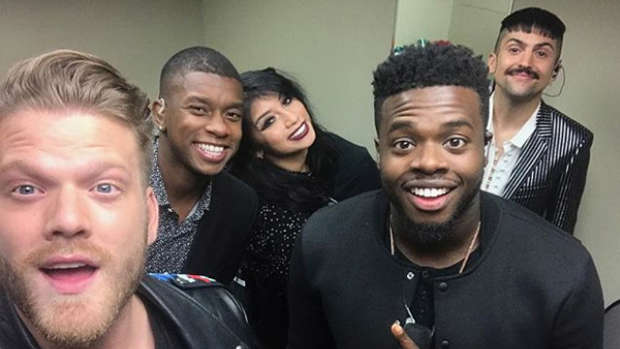 It's been over 5 months since the founding bass singer of Pentatonix called Avi Kaplan decided to step away from the acapella group.

The Pentatonix YouTube channel, with over 13 million subscribers has been quiet since then but with the holiday season approaching, they've added a new member to the group.

His name is Matt Sallee and he'll join Pentatonix as the bass voice for their upcoming tour and a new album, titled A Pentatonix Christmas Delux.

Salle is a graduate of the Berklee College of Music and will take over Kaplan's position in the group.

"If you happen to be at our holiday special taping or you’re at any of our shows this winter or you’re listening to our performance of "Deck the Halls” on A Pentatonix Christmas Deluxe (and, eventually, watching its video), you might see or hear the wonderfully deep voice of Matt Sallee, who we are very fortunate to have joining us for the holiday season.  We love Matt and we think you’ll love him too.  We took this picture on set of our “Deck the Halls” Guys! So it's official! I am so honored to be singing with @ptxofficial!!! They have been nothing but the most humble and sweet human beings in the world and I'm so blessed and humbled to work with a group of people I have looked up to for such a long time. Dreams do come true people! I'm living proof of it 😌💚

Fans will get their first chance to hear the new voice when Pentatonix's Christmas album drops on October 20.

It consists of 16 tracks and will add several songs to their original Christmas album which was released last year as the group's third holiday-themed collection.

We're definitely getting excited for Christmas and can't wait to sing along to the new tracks on whats bound to be a great album!