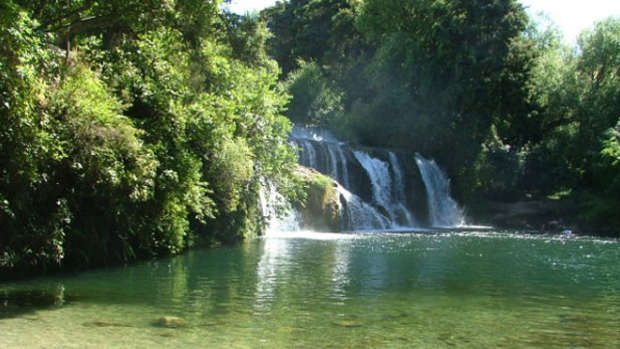 How is it you can live in a region for six years, travel to a location you have been to before and still get lost?

We had four teen and pre-teen boys at our house on Saturday and as you know, it was hot!   So we needed to find somewhere with water to swim in, shade to sit under and preferably something that wouldn’t cost much as we almost had to take out a second mortgage just to feed the hungry lads.

We decided on one of Hawke’s Bay’s many gems, Maraetotora Falls.  We have been there before but it was several years ago so thought trusty Google Maps would be our best bet of getting there in a timely fashion.  The location came up no problem and we started the navigation which led us out of Hastings and towards Waimarama.

“At the next intersection, continue on Kahuranaki Road” said our navigator in her extremely annoying American accent (who is incapable of pronouncing any words that aren’t simple English).

“Huh, I thought it was down Waimamara Road” said my better (and clearly wiser) half.

“I think Google knows where the falls are honey” I replied.

Turns out Google has no idea.

After travelling the required numbers of kilometres, annoying voice lady told us to turn left up some little road, then another left up what we swore was a driveway but once again, we trusted Google’s directions.

We soldiered on past several houses (probably a clue there) and some lovely woods, before arriving at the end of what was indeed a driveway, greeted by a dog wondering what on earth we were doing on his property.  We were wondering the same thing.

So we turned around, travelled back to Waimarara Road and once again typed our location into Google Maps.  Our friendly navigator instructed us to turn right down Maraetotara Road.

She then told us to travel another seven kilometres but after just a few hundred metres we spotted many cars parked up and realised we had reached our destination. Goodness knows where old annoying voice was taking us.

There’s something to be said for old fashioned maps; they never led anyone up some poor stranger’s driveway…and there’s no pronunciation issues!