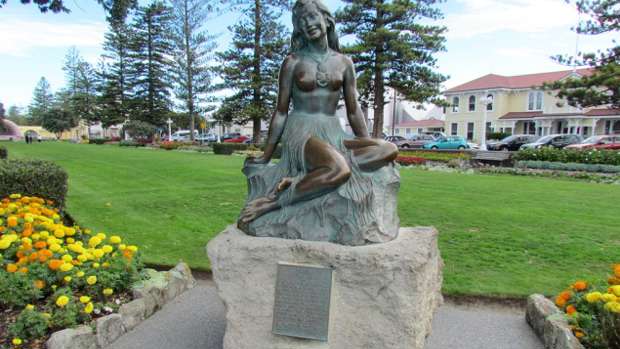 One of the things we love as people who live in Hawke’s Bay but were not born here, is having lots of family and friends from out of town visit.

They come to our beautiful region and are in awe of our landscape, (usually) glorious weather, amazing sights and great people. It fills you with a sense of pride when you’re able to show people around for the first time and hear their intake of breath as they admire all that Hawke’s Bay has to offer.

Unless you stuff something up.

This happened to Sarah on the weekend, and while no one was surprised, everyone did have a good laugh at her expense.

Whilst showing several visitors around Napier city, one of them announced that she’d heard a lot about Pania of the Reef and as it was her first time visiting Hawke’s Bay, she’d love to see the famous statue and get a picture with her. Sarah said “Sure, no problem, we’ll stop off there before we head to Ahuriri.”

Down Marine Parade they went, past Skate Zone and the National Aquarium with Sarah pointing out these local treasures.

“If you look through those trees there you’ll see Pania on your left” Sarah announced.

“Oh yes I see”, replied the visitor. Then “Is that it? I was expecting something a little different.”

They turned around and headed back towards the Port while one of the visitors Googled Pania and started reeling off information about who crafted her and her location.

“I’m pretty sure she’s further up this way,” he said. Sarah scoffed. Did he trust Google more than her local knowledge?

Just after they passed the MTG Mr Know-it-all exclaimed “There it is, on the right!”

Sarah looked and the blood drained from her face as she suddenly realised he was correct.

The statue she had pointed out was in fact the Spirit of Napier.

Not willing to admit she didn’t know which one was which even after residing here for over five years Sarah declared “Oh, I didn’t know you were talking about THAT Pania. The other one is called Pania too but is also known as the Spirit of Napier.”

She then scuttled very quickly out of the car hoping none of them would Google the Spirit of Napier and discover that no one other than Sarah has ever referred to her as Pania.