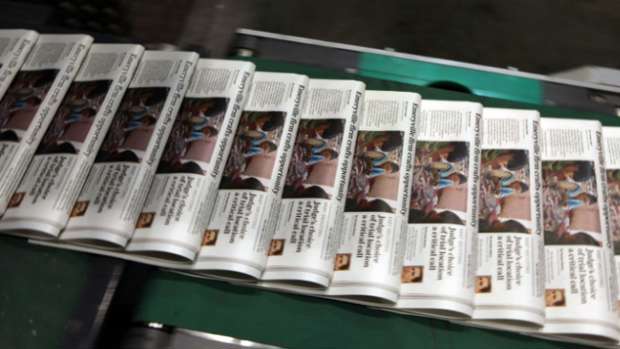 Check out our column in Hawke's Bay Today each Wednesday.

When we were asked to do a weekly column for the Hawke's Bay Today, initially we were excited! Wow, someone cares enough about what we think to offer us part of the paper to share our thoughts with the world? Amazing. The excitement was quickly over taken by apprehension. Hang on a second. We have to write stuff? We work in radio. We don't write! We speak. Words that are spoken then disappear into the airwaves and are gone and sometimes, hopefully, forgotten. Print is a whole different kettle of fish where people can actually see what we're saying and can quote us back to ourselves. So naturally, we were a little nervous. Our angst only grew once we were informed photo's needed to be taken. Again, we work in radio and not television for a reason! Photo's were taken at our studio in Napier, then more as we were shown around the beautiful new Hawke's Bay Today building in Hastings. (Seriously, have you have seen that place? We are extremely jealous of their tea room, that even has it’s own pie warmer, and are planning to suggest to the boss that perhaps we'd work better in a building that isn't a hundred years old with a malfunctioning air conditioner) Flash bulbs were going off left right and centre, so much so that Sarah felt like Hawke's Bay's own Kim Kardashian...with a slightly smaller bum. Martin disagrees with the smaller bum part. But now here we are, you've seen our faces and now you're reading our words, and hopefully you enjoy them because they'll be coming at you every week from now on! Don't expect anything too serious to appear in this column, or anything too intelligent, bit like our on air show actually. After all, there's a reason we studied radio at Broadcasting School and not Journalism- journalists are required to have an IQ over 100, unlike most of the nutty announcers you hear on the air. Aside from the photo shoots and the daunting task of writing actual words every week, we are indeed very excited about this column. It fits in well with our plan of world domination, mwah ha ha. Next step? Our own TV Show. Oh no, that's right, faces for radio. Hmm. Well until we have enough money for lipo suction and botox, you're safe Simon Dallow. But after that, watch out!