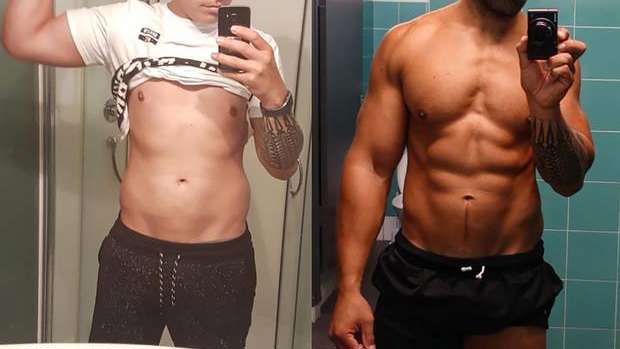 In two photos side by side of Gary-John Hill, taken six months apart, he looks almost unrecognisable.

The man on the left is pale, has little muscle to him, is skinny and his hair has fallen out, while the man on the right is toned, tanned and has a full head of hair.

Speaking to the Herald, Hill, a personal trainer, shared his battle with cancer that began just last September and almost claimed his life.

"I felt pretty good, then all of a sudden started coughing and went backwards and forwards to a doctor. I just thought it was a cold," the 30-year-old said.

It was then that he learned he had stage-four cancer and if he didn't undergo chemotherapy immediately, he had just two weeks to live.

"It was a 60cm tumour in my chest, pushing up against my heart, covering my lungs."

He also had tumours in his lungs, his neck and his kidneys.

Hill started treatment the very next day. The sudden shift in his health was, as he described it, "pretty damn scary".

He endured seven long months of treatment. Hill was almost speechless when asked how difficult that was.

"There were times where I just wanted to die because it was so hard. I didn't care anymore." The type of treatment Hill had meant he couldn't go out, as even the smallest infection could kill him.

Hill said his last chemotherapy session was timed well as he had reached his limit. "I was free of cancer but the treatment would've killed me."

Hill lost 30kg and said even getting out of his hospital bed was a struggle.

When he was able to go home, he was quiet, weak and didn't want to do anything.

"I eventually got my confidence back and started meeting people and started not to worry about it so much and let things sort of fly."

He got back into training, making very slow progress at first.

"My abs and my legs hurt after walking 200 metres down the road, that's how much my muscles weren't used to being used. I struggled to sort of lift my arms up."

Hill admitted that he looked "pretty funny" at that point.

He could only muster very light weights. "I'm quite a tall guy so I looked fairly lanky and really skinny so I didn't look well at all."

Week by week, his ability to carry heavier weights improved and he began to feel like his old self again.

Now, he's gearing up to compete in the WBFF Worlds - the world of beauty, fitness and fashion - in Las Vegas. He heads to the US on Monday.

"I'm so happy to have this gift and to have got [so] much stronger," Hill said. "It's more than physical, it's mental as well."

He still has a mass inside his chest but there's no cancer in it.

Going forward, Hill has to have checkups every three months.

When asked about what the future holds for him and his wife, he says they plan on having children. Thankfully, he says, that dream is still possible. He was able to put aside some of his sperm prior to the final stages of his chemotherapy treatment, just before he became permanently infertile.