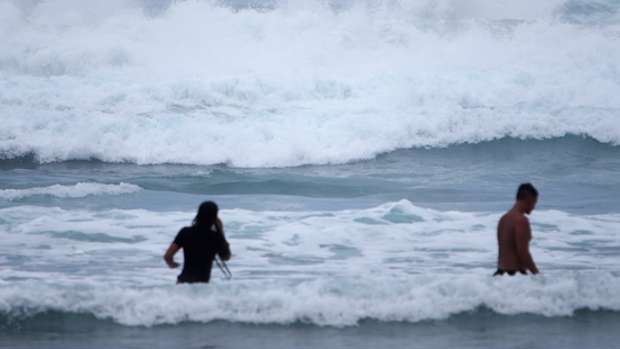 The flags were crossed after lifeguards patrolling the popular beaches at Ocean Beach, Whangarei Heads, and at Waipu Cove deemed there was no safe section to swim yesterday.

However, despite the warnings some ventured into the foaming white wash at their own risk.

Regional Lifeguard Brad Kehoe said the waves at Ocean Beach, which were up to 3m high, had plenty of force and could easily knock a person standing in the water over and sweep them out to sea.

At full tide the waves had washed all the way up to the sand dunes.

"There's loads of rips and turbulence which you can expect with these conditions. "A confident swimmer would have trouble out there today with those currents. It could be disastrous for a poor swimmer," he said.

A 36-year-old Whangarei man was airlifted to Whangarei Hospital by the Northland Electricity rescue helicopter after he was slammed into the beach by a wave at Matapouri on Monday afternoon.

Holidaymaker Richard Lowe said he was in the water when he saw a fellow swimmer dumped by a wave.

"We pulled him on to the beach. He was in and out of consciousness. He lost movement in his arms."

An ambulance was called for but the helicopter arrived first. The injured man was yesterday released from Whangarei Hospital with a neck brace.

MetService meteorologist Stephen Glassey said the waves were the fallout of former tropical cyclone Victor. The big swell was being felt in Northland, Coromandel and the Bay of Plenty. He said the swell would continue to ease over the week to about 1.5m on Friday.

Waipu Cove resident and coastal engineering consultant Andre Labonte said there have been no signs of foreshore damage. Mr Labonte said big groundswells, and the broken water rolling on to and along beaches after waves have broken some distance off the beach, generally deposited rather than eroded sand further up the beach.

He said a lack of offshore wind with the present conditions meant there was no "long-short current" action that would usually erode the shore. Mr Labonte said that even after living on the coast for 30 years, it was unusual to see big groundswells sustained over a long period of days. He said he had spoken with keen surfers who joked they were getting sick of surfing. The wave action was typical of the kind the region experienced when tickled up by ex-tropical cyclones.

"We moved here just before Cyclone Bola hit and these swells are nothing like what we had then, but they're still sizeable," Mr Labonte said. Cyclone Bola wreaked havoc on Northland in 1988.

Another bonus is that the tidal conditions have not increased the heavy dumps of algae that plagued Waipu beaches earlier this month.

The recent full moon has seen the tide wash high up the beach, and the sweeping water movement and deep offshore wave break has held the algae in the tide rather than re-depositing it.