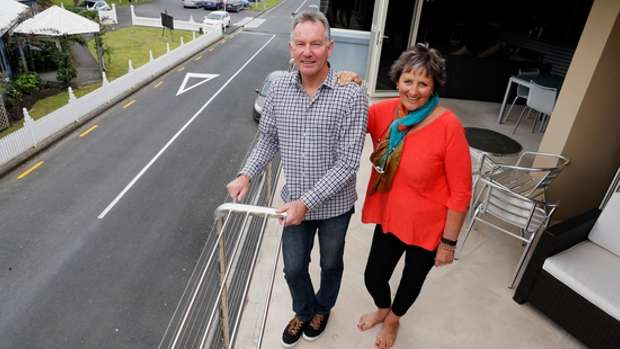 Michele and Hilton Leith say having more residents in the CBD is part of the future for Whangarei.

A couple living at Whangarei's Town Basin for more than 15 years say having more CBD residents is essential for the future of the city.

Whangarei District Council's Hihiaua Precinct Plan, which proposes residential apartments up to four storeys and boutique business at the peninsula by the Town Basin, has drawn criticism from some leaseholders in the area, who say the council is trying to move them on.

The plan would be at the expense of Whangarei's lauded marine industry, they say. But Michele and Hilton Leith, owners of an apartment on Reyburn House Lane and the commercial premises below it, see things differently. "The fact is you don't need industry on the waterfront any more," said Mr Leith. "I'm not at all anti any of the businesses down here and they are an important part of Whangarei and its growth."

"But another argument is: what is the best use of this for this city?" The Leiths gushed about the cruisy retirement lifestyle they enjoyed in the CBD. "I love it and I think the council is on to something," Mr Leith said. "My wife says I won't get her away from there. It's a really quiet area, you've the big new [Hatea Loop] walkway in front of you. You can walk into town and drink and not worry." Mr Leith, a former real estate agent, said he had walked around the area and counted about 30 businesses he thought would not fit into the proposed plan change. Others, however, would thrive. "Once you have people living down here you need doctors, dentists, cafes, day cares," he said. Richard Johnson, who owns a diesel fuel injection business and building on Hihiaua had previously spoken to the Advocate about his concerns that the plan change would force him and other marine-reliant businesses out.

They were told Pipiwai Rd or Southend Ave were other Business 2 environments they could consider. "We have no idea how the yacht owners who spend millions in repairs year on year will get there," Mr Johnson said. The land at Hihiaua is owned by WDC and the regional council, though buildings and perpetual leases were mostly privately owned.

The Hihiaua Precinct Plan is a pre-cursor to proposed changes to the district plan that would help the area to become mixed residential and retail over time, said WDC's group manager district living Paul Dell.

More information on WDC's future vision for Whangarei is at whangareimomentum.co.nz.