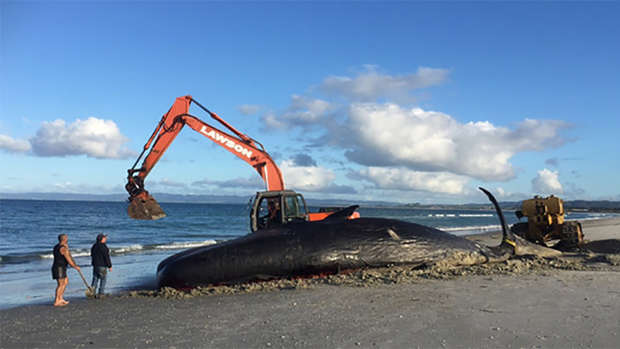 To some people connected to Whangarei Harbour a dead sperm whale found on Mair Bank is a shipping and health hazard; to others it is a message from their tupuna, an ancestor.

As far as everyone is concerned, the huge carcass needs to be disposed of - but different hapu with roots in the harbour, its mountains and its coast disagree about who has that right and the way it should be done.

The 15m-long, male sperm whale carcass was dragged ashore at the northern end of Ruakaka Beach after being found on the sand bank near the harbour entry at Marsden Pt on Tuesday morning.

Department of Conservation (DoC) arranged for it be towed in to prevent the incoming tide floating it into the shipping channels. Te Parawhau, Ngati Kahu and Ngati Tu kuia Waimarie Kingi contacted the Northern Advocate to voice her concerns about the hapu Ngatiwai's involvement with the whale she said was in Te Parawhau waters.

Kingi said the hapu's tikanga, or custom, was for a carcass to be buried, not stripped.
"We have a history with the whales. It is part of our past that a sperm whale will visit us and it is a message from the heavens.

"We want that whale buried, that is what we do. It's not our tikanga to cut it up. It's a kaitiaki, an ancestor, and we do not cut up our tupuna."

But DoC operations manager Geoff Woodhouse said, "That whale's going nowhere. Right at the moment our focus is dealing with a 30-tonne carcass we can't move. There are physical and practical reasons that whale will be dealt with on site."

The biggest bulldozer available had been unable to budge the carcass from where it was pulled onto the beach, he said.

Woodhouse declined to comment on the matter of rohe other than to say there was an agreed whale protocol between DoC, Ngatiwai and Patuharakeke.

Patuharakeke Trust spokeswoman Juliane Chetham and Ngatiwai Trust chief executive Kris MacDonald said the whale was being treated no differently to many that have beached or died in the area.

MacDonald said Ngatiwai had a close association with the harbour and shared common ancestors and whale history with all local hapu.

"From Ngatiwai's perspective, there are several hapu of Whangarei Harbour. We respect that, but we have an agreement with DoC and Patuharakeke. These whale bones will be treated as the taonga they are."

Ngatiwai whale tikanga expert and kaumatua Hori Parata will flense, or de-bone, the carcass on Saturday. He has worked on more than 400 whales - from single strandings of rare specimens, such as the one at Mair Bank, to mass strandings of pilot whales.

The bones will be carved into taonga in the customary manner. 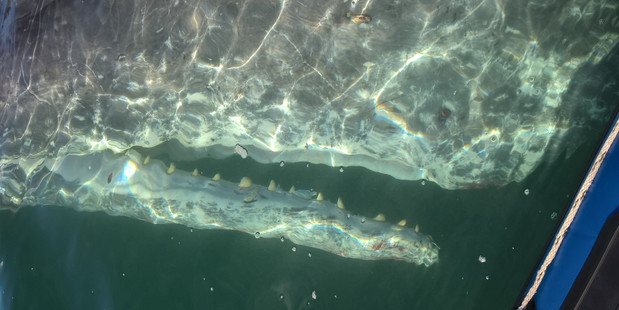