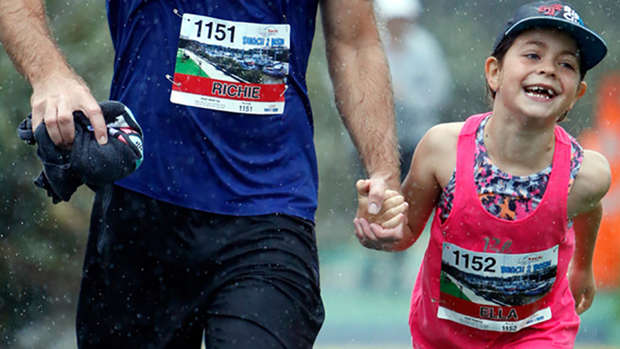 Richard and Ella Hudson, of Whangarei, both participated in the Beach to Basin event. Ella had her number pulled out for a spotprize but Richard was not so lucky. Photo / John Stone

Sport Northland is reviewing spot prize rules for its Beach 2 Basin run and walk event after a Whangarei woman entered but did not compete and won a trip to Fiji.

Hayley Chapman entered the event, held last Sunday, but subsequently could not join the 1908 participants due to a back injury.

However, she was at the Town Basin last Sunday and placed her race number in a spot prize bin, and won a trip for two to Fiji.

Sport Northland drew the spot prizes in its offices on Western Hills Dr because of rain.

Full results of the draw were later announced on radio and Facebook.

A group of about 20 club runners that took part in the annual fun run and walk are crying foul that Ms Chapman won the major prize despite not taking part.

However, Sport Northland chief executive Brent Eastwood said Ms Chapman did nothing wrong as the current rules - now under review - did not disqualify her.

A runner from an organised club, who wished to remain anonymous, said to award a major prize to someone who did not compete was ethically wrong.

"A lot of people will feel why should they take part in a fun event when it's not fun for a person to act in that way. It just seems very unfair.

The Chilltech Beach 2 Basin was started by Athletics Whangarei in 1978 and Sport Northland took over the event 16 years ago.

The club runner who spoke to the Advocate said her members had not ruled out boycotting the event next year.

Ms Chapman said she had sorted the issue with Sport Northland.

"I haven't broken any rules and that's all I have to say."

Mr Eastwood said Sport Northland was not aware Ms Chapman had not competed until his events manager was alerted to it through Facebook on Monday.

"Our rules say you have to be an entrant but does not specifically state you have to participate in the event in order to qualify for the spot prizes because there's no way of monitoring whether or not people have participated in it.

"If we put in rules that people must participate to enter the draw, we still will have to rely on people's honesty.

"In this case, this lady has gone with the best intention of taking part but couldn't because of her injury but was present there in the end so she won fair and square," he said.

Mr Eastwood said it was worth having a relook at the rules pertaining to entering the prize draw.

Online prizegiving information for the Beach to Basin event says participants must be present at prize giving and show their event number to claim their prize.

Other than "participants", there is no reference to having to complete the event.

The Beach to Basin information refers people to "full terms and conditions for all prize draws" at www.runwalkseries.co.nz

However, no up-to-date 2017 prize information is on the website.

Under the website's "Prizes" category, there is a reference to 2015 spot prize rules for a Mazda 2 and a Daikin Heat Pump.

The car rules say the draw is open to entrants - not participants - with no mention of having to complete the race. The heat pump rules do not state that finishing the race is a requirement.

However, 2016 rules under a "Win A Car" section state the winner has to have participated in at least one Sport Northland Run/Walk Series event.