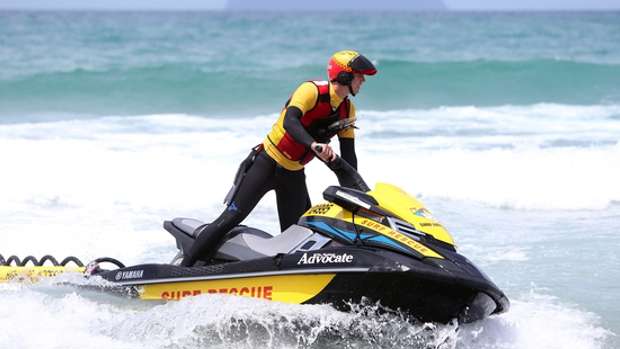 The addition of a jetski to patrol Bream Bay has played a key role in keeping the beaches fatality free over the busy summer holiday period, a senior surf lifesaving official says.

The jetski allowed lifeguards to cover a larger slice of the coast and speak with more people to educate them about the dangers of the beach, particularly visitors from Auckland gathering crabs.

The $25,000 jetski came after the Northern Advocate joined forces with Whangarei Lions and Surf Life Saving New Zealand to get the money for the potentially life-saving jetski following two drownings in Bream Bay last summer in areas away from surf patrols.

Unfortunately, before the jetski was operational a crab fisherman drowned last November when he fell into the water from a child's inflatable boat and was not wearing a lifejacket. Despite a concerted effort by lifeguards and volunteer beach patrols as part of an education and signage programme at Uretiti and Waipu beaches to assist the Asian communities in fishing safely, some had not heeded the warnings.

However, last Saturday two 14-year-olds, who were crab fishing at the Waipu River mouth, were plucked to safety by off-duty lifeguards training in inflatable rescue boats nearby.

Veteran lifeguard Ian Godfrey, of Waipu Cove, said it was lucky the club members had been training after-hours as two more lives could potentially have been lost in relation to crab fishing in the area.

"Where the patients were picked up was well beyond the point of no return as they were being swept further out to sea. When taking into account the conditions, the patients' capabilities and levels of exhaustion, it could have quite easily resulted in a search and body recovery," Mr Godfrey said.

"It was disappointing and frustrating that after returning the children to the beach, and talking to the parents of the potential outcomes, they proceeded to put the pots out again in the same place.

"Two boats remained nearby keeping an eye on the crab fishermen until they left the water." Regional lifeguard supervisor Chase Cahalane said the jetski had been a success over the busy Christmas holiday period when the beaches were crowded.

Lifeguards on the jetski had been involved in plucking swimmers in trouble from the water and it was also used to help kayakers and those on inflatable boats who were not in patrolled areas. "It allowed the senior guards the ability to cover a large area of coast very quickly. It gave them a platform to get to people in the water and educate them as well," Mr Cahalane said.

The jetski was mainly used between Waipu and Ruakaka, but was also dispatched to Mangawhai to help with beachgoers during rough conditions.

On Tuesday the water vehicle was on standby to go to Ocean Beach at Whangarei Heads after reports of an overdue diver. However, the person was found a short time later.

This weekend is the last weekend the jetski will be used this summer as paid regional lifeguards finish their week-day patrols.

Volunteers will continue to patrol beaches at Mangawhai, Waipu, Ruakaka and Whangarei Heads until Easter. Mr Cahalane said people needed to exercise caution when heading out into the water.

"That means not swimming or surfing alone, stopping to assess the conditions and potential dangers, and not overestimating your ability."