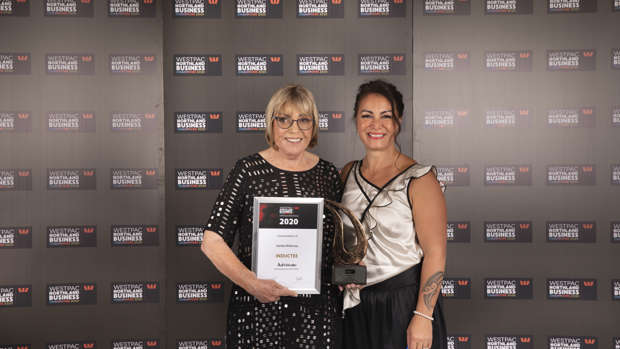 On Friday November 6th, Char attended the Northland Business Champions Awards to induct this years recipient of the Northern Advocate Hall of Fame to Sandra McKersey.

Sandra McKersey lives in Whangarei in New Zealand. She has two adult daughters, five granddaughters, one grandson and two great grandchildren. Her husband Eddie, died nine years ago after a long illness. Sandra was a teacher of English and History before she began her own training company People Potential Ltd which has grown from a tiny business to a large institution with five campuses. This is a family business spanning three generations and it has a reputation for excellence becoming Training Provider of the Year on many occasions. Sandra says the secret to the success of a business is to surround yourself with clever people who have skills you don’t have yourself. Over the years she said everyone who has spent part of their life journey with the business has brought their own special qualities and strengths. Most importantly they have brought their heart to work as well as their skills. They have been committed to giving their students a new vision of their own academic potential and they have gone well beyond the expectations of their employment. Many of those who joined the team in the early days are in the business today and they are experts in their field.

Sandra’s qualifications include a Bachelor of Education from Massy University plus a degree in Applied Business Management. She has served as the President of the NZ Association of Private Tertiary Educators and while in that role saw the establishment of a Quality Commission to self-regulate the industry.

Another of her strong philosophies is that a business need to be constantly evolving. Moving over and moving out of a business give team members the opportunity to use their brilliance and so Sandra while still a shareholder of the business is no longer a Director. She thinks three generations in a business is one too many. Also she says who is lucky enough to be able to leave a business and see it continue to thrive and prosper. Her family including Andrea, Kevin, Shaan, Hannah, Bronwyn and the rest of the management team are outstanding.

Sandra has been a Rotarian for almost thirty years and in that capacity has worked both nationally and internationally in a wide range of roles. She has served District 9910 as a District Governor and was the first woman to hold this position in New Zealand. Apart from her many District roles she has been an International Trainer in San Diego for two years and she presently serves as the Chair of the Rotary Action Group Rotarians for Family Health and Aids Prevention. She is also a member of the Cadre of Technical Advisers, a group of experts who audit the projects supported by The Rotary Foundation. In this capacity she has travelled to many corners of the world and found herself in places she could never have imagined.

One of those places was Bangladesh where she was involved in auditing a sewing school. The sewing school was situated in the ground of the Alhaj Amizuddin Orphanage. She was distressed at the living conditions of the orphans who are now housed in a magnificent dormitory which also includes an auditorium. Sandra continues to support this organisation helping to open a library and a computer lab. She has recently been the recipient of a Service Above Self, the highest award to be given to a Rotarian.

Sandra is also involved in the business community in Bangladesh. While the business is predominantly in the food industry a key goal of the business is the employment of unskilled young men who receive not only training but also the self-respect of learning new skills and being a contributing members of society. So far the business has employed more than 80 young men who would otherwise be unemployed. The mid-term goal is to begin a training institution which will ensure that these young men gain qualifications. During the coronavirus, the business has developed a home delivery service with its own app.

Sandra Loves it here in Whangarei and while her many international interest have in the past taken her around the world she has always been involved in her home town.

She was awarded a Queens Service Medal for her services to education and the community and among her many passions we can add her immense enthusiasm for the Huntertwasser, the Camera Obscura and The Whangarei Rolling Ball Clock. She is a passionate supporter of anything which will add to the economic and social growth of Whangarei.

Sandra continues to find challenges in every area of her life. From sky diving to skeet shooting, age has proved no barrier.