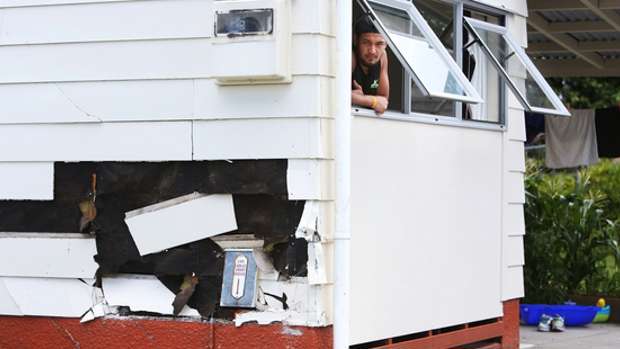 t was a terrifying morning for a Northland family after a woman drove a van into their house stopping within centimetres of their 2-year-old son.

Alyssa Toi was having breakfast with her son Nikau, 2, yesterday when she heard a loud bang and looked outside the window of their home in Steere Place, Tikipunga, and noticed her fence, which had been closed with bungy cords, was wide open.

"I ran into the room and told (partner) Sam and said 'I think someone crashed into the gate' I looked outside again and I watched her reverse into another car and accelerate at full force into the house. My son was (standing behind) the wall where she smashed and I swept him out of the way."

The car hit within centimetres of Nikau and a small shelf had fallen over, but the child was luckily uninjured.

Ms Toi's partner, Sam Henry, who was sleeping at the time, jumped up and out of the window and tried to stop the woman immediately. He said adrenaline was rushing through him and because the van was still turned on and smoking he thought it would either explode or she would keep driving. 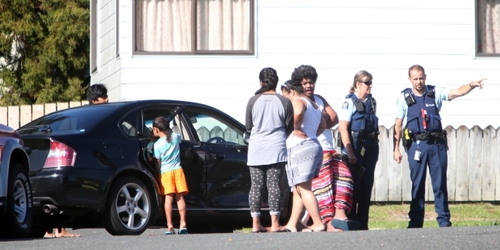 "I tried to unlock all the doors but she had locked them and hopped into the back. So I smashed the window of the car and pulled the keys out," said Mr Henry.

He said while the woman was in the back of the van, she removed her robe and was naked. The police arrived shortly after.

"She (the woman in the van) just wasn't there. She had blanked, it was nuts. She had no emotion," said Ms Toi.

The couple said it was terrifying to think what may have happened if the house had no concrete foundations to stop the van going into the bedroom.

"The only reason she stopped was because the foundations stopped her from going further. If that wasn't there we would have been smoked," said Mr Henry.

The woman's out-of-control driving did not start in Steere Place. Police spokeswoman Sarah Kennett said police were first called at about 8.45am because the woman was driving through Te Kura Kaupapa Maori o Te Rawhiti Roa. She said a man had followed the woman after noticing her erratic driving and watched the woman crash into a power pole on Thomas St, drive down Steere Place, crash through Ms Toi and Mr Henry's fence and smash into the man's car before driving into the house.

"Someone could have been seriously injured," Mrs Kennett said.

Emergency services, including multiple police cars, ambulance and fire units, arrived at the scene. The woman driving the van was transported to Whangarei Hospital by ambulance. No one was injured, and Ms Toi said it was a miracle no one was on the street at the time.

"There's always heaps of little kids running around on the roads and on the street. It's unusual there was none."

"She could have killed someone," said Mr Henry.