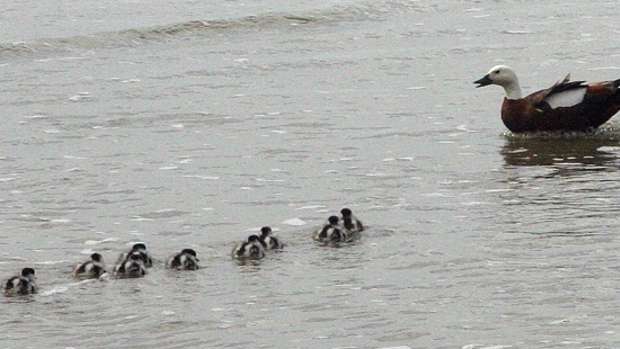 Far North sports reporter Francis Malley has seen a few strange things when surfing in and around Shipwreck Bay - but even he was amazed when a paddling of ducklings tried to catch a wave with him.

Malley - the Northland Age's sports reporter extraordinaire - was at Te Kohanga last week hoping to catch a few waves when he saw a paradise duck on the rocks with nine chicks.

He said the mother was encouraging the ducklings to dive into the surf and try to make it to the other side of the breakers. The ducklings made several attempts, with the mother duck at times surfing a wave back towards them, before they were successful.

"They were having a real hard time getting out and getting smashed by the surf and washed down the beach. I've never seen anything like it before, it was weird," Malley said.

He said he had seen a few strange things in the water while surfing or taking photographs of surfers, but the surfing ducks beat them all.

"The mother was surfing on her belly on the whitewash. I've never surfed with ducks before so this was a first."

Malley said all the ducklings survived their first surfing expedition so he fully expects them to try to catch a wave with him in the future.