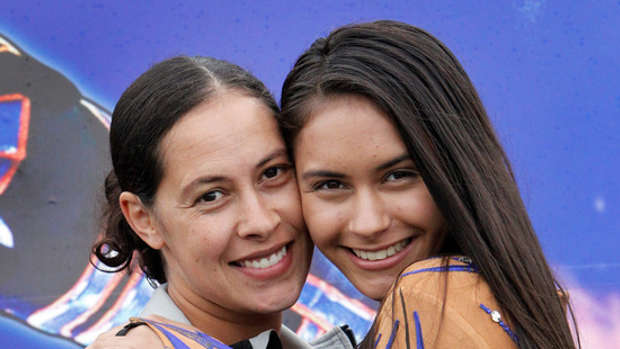 Aucklander Marie Weber came to Whangarei for a visit 21 years ago and decided to check out the Weber Bros Circus in town.

After the show, she chatted with the circus director Harry Weber and later that night the pair went on their first date at Killer Prawn.

The show in 1996 was held behind the Caltex service station on Tarewa Rd.

"For the next two months, I travelled back and forth to their circus and then pretty much ran away with the circus," Mrs Weber said.

The couple now have six children between the ages of one and 18 and the seventh is on the way.

All the Weber kids travel with the circus and are home schooled by two teachers.

Mrs Weber's two sons ride in the "Splitting Globe of Death", where motorcyclists ride at 80km/h inside an oval-shaped cage, one daughter is a silk dancer while another does the trapeze, a short horizontal bar hung by ropes or metal straps from a support.

"My children don't know any other life, which is a good thing because there's less peer pressure, and they are not into drugs because they are with us all the time.

"All six were born on the road during circus tours in Australia but the seventh one will be a Kiwi baby."

Mrs Weber takes care of the administration side of things.

Her eldest child, Kiarnna Weber, is excited about performing in front of a new audience as she has never participated in the circus in Whangarei.

The 18-year-old is a silk dancer, suspending herself metres above the ground on a length of silk, performing gymnastic-like dance manoeuvres.

"When you perform in front of a new audience, you wonder what they will be like and when you see the expression and the screaming, it makes it all worthwhile.

"That's what we want them to do. They are not the only ones watching us, we watch them as well."

She has been performing in the circus for four years.