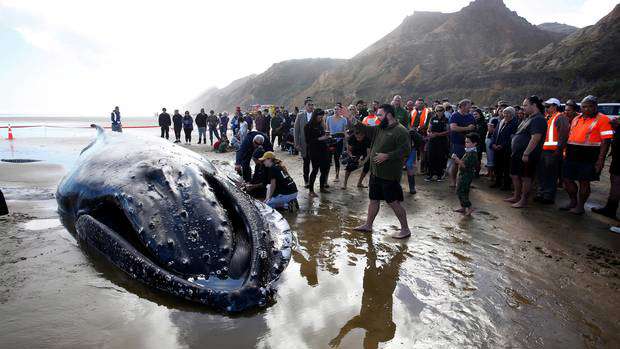 The words of a powerful karakia rose above the sound of constant breaking surf during a blessing of the adult humpback whale that died on Ripiro Beach.

It was the surf, expected to become rougher and more buffeting over the next 24 hours, that would be the final straw for the severely weakened marine animal, a distraught Dr Ingrid Visser said.

Around 8.30am yesterday the decision was made to euthanase the giant marine mammal which, with a smaller companion, became stranded on the beach on Sunday.

The lethal bullet was administered by a specialist from the Department of Conservation (DoC) at 1.45pm.

He was flown from a DoC region further south after iwi, Visser's team, DoC and Project Jonah decided there was ''absolutely no chance of survival'' for the roughly 25-metre long whale.

Visser said it was a humane end for the whale which two days and nights of rescue attempts and life-prolonging care by experts and an army of volunteers had been unable to save.

At the scene before the death, kaumatua thanked the many people who had helped and lent support after the stranding, giving special thanks to Visser and her team.

Snow Tane and Sonny Nesbit from Te Roroa, who had also spent long hours on the beach since Sunday, described the outcome as disappointing but necessary.

Francis Toko from Kaihu gave a karakia, and Te Roroa iwi and Te Uri o Hau sang and performed haka to bless and honour the two dead whales. The whales had come ashore right on the boundary between the two tribes' traditional rohe or territory.

Tane said the people would not give names to the dead whales but traditionally humpbacks were called Tohora Taonga-nui.

An estimated 500 people were at the scene earlier in the day but the crowd had dispersed before the whale was shot. A tarpaulin was erected around the body to shield the preparation and the moment of death.

''The whale's condition is deteriorating, she is in distress and unlikely to survive,'' DoC Kauri Coast operations manager Stephen Stoole said yesterday morning.

"Those with the whales did all they could to keep them comfortable and attempt refloating. A big thanks to Te Roroa, Te Uri o Hau, Project Jonah, Ingrid Visser and her team and Northland locals who worked alongside DoC staff to help the whales as much as possible.

''This is a sad outcome and a decision not taken lightly," Soole said.

The refloating attempt the day before failed after a huge trench was dug which rescuers hoped would provide a channel for the whale to reach the sea at high tide.

Although seawater rushed in, it was not enough to get the huge bulk off the sand. While the whale responded to the feel of water by slapping its tail for the first time in hours, it appeared very weak. The 6am tide yesterday was not high enough to refloat her.

The younger whale stranded a the same time and place on Sunday morning died on Monday around 7.15am, after a 24-hour struggle on the sand in the mid-tide zone.

As the army of experts and volunteers struggled for two days and nights to keep the second whale moist and cool, a changing crowd of community members stood in vigil behind a roped-off area. The mood swung from hope to sorrow, with an almost palpable feeling of goodwill for a creature from the sea most people present would never again get to see so closely.

A DoC spokeswoman said iwi and DoC representatives would stay on the beach with the carcasses last night.