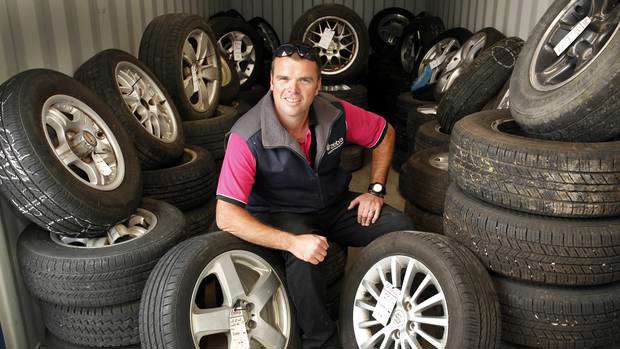 The plight of a Whangarei widow who was the victim of a crime when thieves stole wheels off her car struck a chord with tyre dealer Scott Browne who has now organised four replacement wheels.

The Kamo-based business owner read about how thieves stole the wheels complete with tyres from a car belonging to 77-year-old Ineke Eveleens-van der Harst, who is dying of a rare disease.

The Mazda Lantis car is not worth much in monetary terms but it as the last thing her husband, Dirk, bought her a year before he died of cancer. He even kitted it out with personalised plates "4INEKE".

Her wish is to drive the car, when she is well enough, before she dies. She has had the car for 20 years.

The story hit home with Browne and his wife, Jess, area manager of Zebra U Pick Car Parts, who wanted to do something to help.

He made contact and is working with Eveleens-van der Harst to replace the wheels and tyres.

"She's a special lady. It was great to be able to help her and this car is a big thing for her," Browne said.

"I just can't believe it quite frankly, it's unbelievable that people can be so kind," she said, pausing to sob.

"It's not just one tyre and I'm gobsmacked that people can help me when I'm in a difficult position."

She said police had carried out fingerprint dusting on the car and other items at the scene in a bid to try to track the thieves.

"I hope that they can come up with something. I'm not overly optimistic but they might be able to catch them."

The car was parked in a shed about 50m from her house in Maunu when thieves took the wheels overnight on April 21-22.

Her care worker raised the alarm on his daily visit to her house on the Sunday afternoon.

Eveleens-van der Harst is dying from an incurable illness sarcoidosis, an inflammatory disease that affects multiple organs in the body, but mostly the lungs and lymph glands.

She also has lung cancer and is in pain most of the time.

She used the car for grocery shopping and her many trips to Whangarei Hospital.

Cataracts have curtailed her driving over the past 12 months but she hopes surgery will restore her sight and she will be able to drive again.

In the meantime she has to use taxis to get around when she is physically well enough because she has no insurance to pay for another set of wheels.