Last week Toni Street revealed that her eldest daughter, Juliette had broken her arm for the first time … but it turns out there’s a little more to the story.

After falling from the monkey bars while on holiday in Whangamata, Toni and her family took the 6-year-old to the hospital.

Yip... first broken bone for one of our kidlets... a buckle break for Juju... the monkey bars won today, but she's amped to choose a cast and show her classmates 👊

Not only did Juju have her "bent" arm in a sling while sitting in the hospital’s waiting room, but the brave little girl also sported a "fat lip" from being sunburnt – which ended up looking quite suspicious to the nurse that approached them.

"A male nurse comes over to assess her," Toni explained. "[He] goes directly to Juliette – pretty much ignores Matt and [me], who are sitting either side. 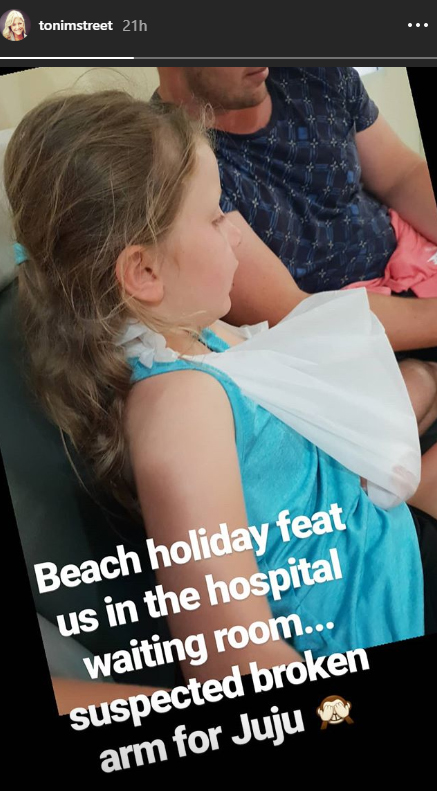 "And I thought, 'oh this is weird that he's doing that, I wonder why he’s doing that' ... and then I looked at my child and she's got quite sunburnt lips to the point that it looks like she has a fat lip!

"So we’re bringing our child in, with what looks like a fat lip and a broken arm …"

The nurse then proceeded to ask Juju about her broken arm and red lip, and - much to Toni’s surprise – if she had "any other injuries".

"And at this stage, it’s just dawned on me that it looks like I’ve brought in a child that looks like it’s been … knocked around a bit."

One has a broken arm... both girls have been crying coz their nana just went home and Lachie just wants to drink his milk in peace... as for me... Monday morning is looking good, catch you on air Hits Fam! - Toni 💓💓💓 #schoolholidaylife #threekids #letsallsitonthesamechair #laurasamandtoni

While Toni had a "dented pride" from the experience, the mother-of-three says she was "stoked" and "glad" with the nurse’s actions and said that’s exactly how the system should work.