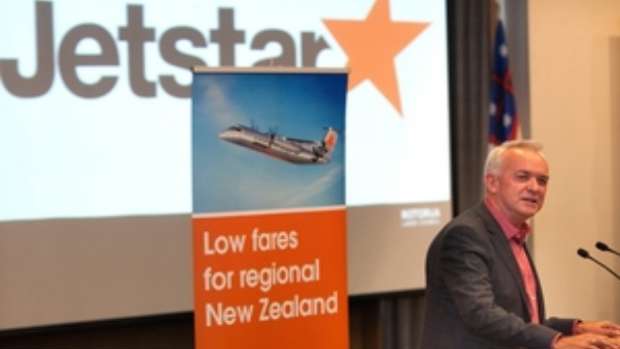 Western Bay of Plenty leaders are disappointed Tauranga has not been named as one of the regional cities where Jetstar flights are being introduced.

Jetstar announced yesterday it would be introducing services into regional New Zealand, with the destinations being Napier, Nelson, New Plymouth and Palmerston North.

Neither Tauranga nor Rotorua were selected. Jetstar said the company saw the best opportunities for growth in the cities it selected.

Head of Jetstar New Zealand Grant Kerr said although Tauranga was not on its initial list the company would continue to talk to Tauranga Airport and stakeholders in the region about future opportunities.

"We understand that you are a very fast growing region and see the potential for the region," he said.

"We need to make sure when we do go into a region it is sustainable. [We] need to start in a position that is appropriate for the five aircraft we are bringing into the country," he said.

Mr Kerr said the company would continue to look into introducing the services in the near future.

Transport Minister Simon Bridges said yesterday's announcement from Jetstar was just one of a number of new regional air services that would be announced .

"These new services are a real vote of confidence in our aviation sector and the future prospects of regional New Zealand."

Mr Bridges said he had expressed his disappointment to Jetstar over Tauranga missing out but it was only a matter of time before a service was offered in the Bay of Plenty.

"It would have been a great opportunity for Tauranga. But I have just spoken with Jetstar New Zealand and they want to carry on the conversation with us and there will be more activity next year.

Tauranga Mayor Stuart Crosby was confident the city was still being considered.

"All is not lost. We are still on their radar screen.

"The reality is they only have five aircraft at the moment and they will look to expand in other regional centres in New Zealand."

Mr Crosby said Jetstar knew Tauranga was a good proposition for the company in two ways.

"We have the lowest landing fees for that type of aircraft for the centres they are looking at and we have growth.

Priority One chief executive Andrew Coker said Tauranga and the wider Western Bay of Plenty had a growing population, employment and economic growth, so the area had a compelling business case for Jetstar to consider.