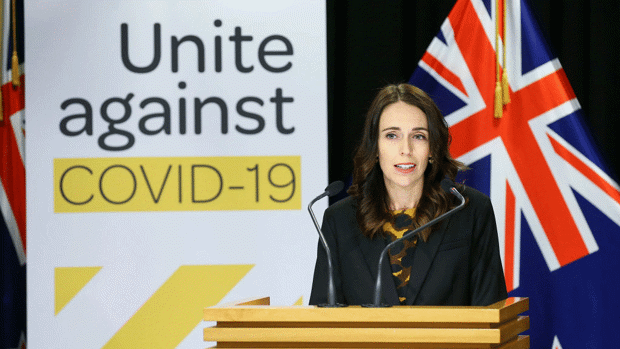 This will allow shops and public facilities in Auckland to reopen and outdoor gatherings to increase to 25 people - and brings Waikato and Auckland into alignment.

Ardern is with director-general of health Dr Ashley Bloomfield to announce Cabinet's decision over alert levels in Auckland and the Far North.

Public facilities like libraries and zoos can open at level 3.2, as can retail - but gyms and movie theatres would still be closed, the PM said.

Groups of 25 can congregate outside without the two household rule.

Ardern said the reasons behind the decision were partly because of vaccination levels in Auckland, which hit 90 per cent first dose over the weekend.

Evidence shows picnics outside does not lead to increases in cases, she said, with only one case linked to an outdoor barbecue.

Significant case numbers hadn't be noticed in workplaces, which explained why retail could be opened.

The decision also acknowledged the impact on businesses and the mental/emotional toll taken by Aucklanders, Ardern said.

There is a strong expectation that Auckland will move into the traffic light system by the decision by Cabinet on November 29, due to high vaccination levels.

Projections show that cases will grow but that isn't the only consideration, Ardern said.

Hospitalisations are also considered and thought to be lower than expected at the moment.

Vaccination certificates would be trialled this week and would be ready for that November 29 date, the PM said.

On Northland, it was recommended by Health that the upper region should move to alert level 2 and it will do at 11:59pm on Thursday.

While there were additional cases today, Bloomfield's view was they could be managed by contact tracers.

Nationally, there are only about 30,000 vaccine doses needed to get the remaining 14 DHBs not at 90 per cent, to get there.

Cabinet will next make a call on Waikato's alert level next week.

On boosters, Ardern said Medsafe had approved a booster of the Pfizer vaccine for people aged 18 and over and more than six months after their second dose.

She understood the health and border workforce were concerned about whether they would need a booster, so that advice was being developed by the technical advisory group and would be shared soon.

Asked about the Auckland border, Ardern said it was a separate discussion to the traffic light framework, but more would be announced about the border and who might be able to move through it next week.

She emphasised that Aucklanders will be able to leave Auckland at Christmas regardless of what is happening around the country.

November 29 represents roughly three weeks for those first doses to turn into second doses and it was likely to be the day the city would move into the Covid protection framework.

Ardern expected to give a date on the border reopening next week.

On whether testing will be required for Aucklanders to leave the city, Ardern said it was one of the issues being worked through, as well as vaccination certificates. Advice was being sought from transport, legal and health advisors.

Between 30-40,000 people would be moving at one time getting out of Auckland, Ardern said, saying that estimate would be on the low side.

Baby in hospital with Covid

Bloomfield said there was definitely pressure on contact tracers but resources would be provided so the initial call to positive cases would be made and ensure how they can self-isolate.

Asked whether there was an infant in hospital in Whangārei, Bloomfield said yes, it was a six-week-old baby.

Bloomfield didn't have any further information about the casualty in MIQ announced today.

PM in Auckland on Wednesday

Ardern said she would be in Auckland on Wednesday, meeting with representatives from business and local government.

On the possibility of facing protestors, Ardern said she would keep it in perspective and said her run-ins with protestors in Northland and Whanganui were not big and she expected to face some criticism as a politician.

She said she would have no further security measures around her than normal.

She said the whole goal with the new traffic light framework was to give certainty to industries like hospitality about when they can open.

Asked how long Aucklanders would have to wait for the framework to be started, Ardern said once DHBs hit 90 per cent double dosed, it would change almost straight away.

"We will be looking to move as quickly as we can and we will be pragmatic about it. "

She said step 3 of alert level 3 did allow some version of hospitality (up to 50 people), however she couldn't give a date on when they might be able to open before a move into the new framework.

Asked about outdoor dining, Ardern said it hadn't been specifically discussed, but public health might give advice on this later.

Bloomfield said the key point was that gatherings should be outside and sensible arrangements can be made when asked about what people should do when they might need to go to the toilet.

On the November 29 check-in and how Counties Manukau DHB might not make 90 per cent double dose, Ardern said all would be confirmed on November 29, adding that she wouldn't be writing off CMDHB.

With three weeks to go, Bloomfield expected the three Auckland DHBs would get to or close to 90 per cent double dosed.

Around 96 per cent of people had had their second dose within six weeks of their first dose.

Ardern said MIQ was being changed as New Zealand's situation changed, but it was important to still have a period of isolation before going into the community. This could be at MIQ or at home.

On international arrivals and their isolation, Ardern said the advice was checks that didn't add to risk were needed.

Ardern said moving to self-isolation would enable everyone to come home and isolate, but with potentially 20,000 people doing it at one time, it would require some management to ensure cases in the community from those returnees were limited.

The Ministry of Health earlier reported 190 Covid-19 cases in the community over the past 24 hours, a figure only below the 206 reported on Saturday.

Of today's new cases, 182 are in Auckland, seven are in Waikato and one is in Northland.

The majority of today's cases (110) are yet to be epidemiologically linked, taking the number still unlinked in the past 14 days to 700.

Thirty-seven of yesterday's 113 cases had exposure events in the community, 74 were in isolation while infectious. It's not clear the status of the remaining two cases.

The seven-day rolling average for community cases is 148 - just above Government-commissioned modelling released last week, which predicted 143 cases at this stage, and which has been guiding recent decision-making.

There are 81 people with the virus in hospital today, up from yesterday's 74. Of those in hospital, 80 are in Auckland and one is in Whangārei.

This is slightly above the modelling, which predicted 78 people in hospital currently.

There are seven people with Covid in intensive care or a high dependency unit, up two from yesterday's five. At this stage the modelling predicted 15 people in ICU.

Meanwhile, an investigation is under way as to whether or not a person admitted to hospital on October 23 died of Covid-19.

The patient, who was in their late-60s, was admitted to hospital for trauma injuries and tested positive after their arrival for Covid-19.

The cause of the person's death will be determined by the coroner, including whether it may have been Covid-19 related.

This morning the ministry said a Covid-infected guest had died in an Auckland MIQ facility.

The person arrived on November 3 and tested positive for Covid during their day 3 routine test at the Crowne Plaza facility.

A ministry spokesperson said the cause of the person's death would be determined by the Coroner, including whether it may have been Covid-19 related.

The latest death comes just days after the ministry launched a review into the home isolation system as a result of two people dying while isolating at home with Covid last week.

A man in his 50s died in his Mt Eden home on Friday and another died at a Manukau apartment on Tuesday. Both deaths have been referred to the Coroner.

There are now 1886 people isolating at home across Auckland, including 816 people with Covid in 661 households.