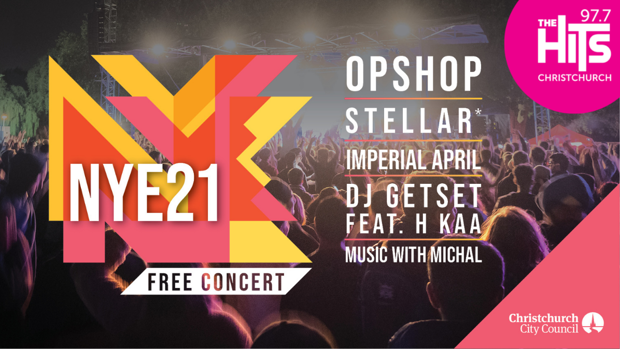 Join The Hits as we see in the New Year with a free concert featuring iconic kiwi rockers Opshop, and pop-rock band stellar*!

New Year's Eve in Hagley Park will start with interactive fun for the whole family with The Hits kids’ countdown around 8pm before a line-up of home-grown talent takes the stage to have you celebrating all night long.

Stellar* who rose to fame in the 90s and early 2000s with hits like Violent, Undone and Part Of Me are excited to perform some of their biggest hits in front of a home-crowd.

Opshop, fronted by Jason Kerrison will be playing all of their crowd favourites at NYE21 including One Day, Maybe and No Ordinary Thing.

DJ GETSET with H Kaa on live vocals will get the party started, followed by Christchurch power-pop act Imperial April before stellar* and Opshop take to the stage.

The night will start with family entertainment from Music by Michal whose song Brave won ‘Best Children’s Song’ at the 2021 New Zealand Children’s Music Awards.

It would not be New Year’s without a huge midnight fireworks display bought to you by the Fireworks Professionals.

A large range of food trucks will be selling delicious treats on the night.

A full line-up of performers and timings will be announced closer to the event.

This is a smoke-free and alcohol-free event. For quick entry don’t bring a bag as these may be searched on entry. No glass allowed. Christchurch City Council remains ready to comply with any new Government advice about COVID-19 if the situation changes in New Zealand.