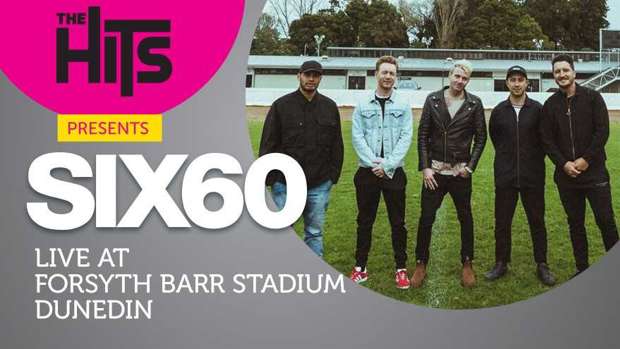 After a huge viral campaign from their South Island fans, SIX60 announce that they’ll be bringing their stadium show to Forsyth Barr Stadium on Saturday 9 March.

The campaign for a Dunedin concert started seriously in November after front man Matiu Walters told The Hits hosts, Callum & P in an interview that band would love to come back for a show in Dunedin.

Callum and P took the comment as a challenge, rallying SIX60 fans on air and via Facebook.

The sheer reach of the viral campaign meant SIX60 couldn’t pass up the opportunity.

Lead Singer Matiu Walters said, "Let’s do it, the people have spoken!"

"It’s not that long since we were in Dunedin to open for Ed Sheeran, but the fans have made it very clear that they want us to come back, we have left our team to pull it together and it seems they have," Walters said.

"We’ve been working really hard on plans for the Western Springs concert, it’s a big celebration of everything that’s happened so far, so it’s amazing that we can bring this special show home to where SIX60 began and where people first supported our music."

The band will be supported by an all-star Kiwi line-up of acts, including Drax Project, SWIDT and IllBaz, all on the line up for SIX60’s sold-out Western Springs concert on 23 February, with the addition of the ultra-talented rapper JessB, especially for the Dunedin show.

SIX60 is the most played artist in New Zealand on Spotify this year (beating last year’s #1 Ed Sheeran), they just won five Vodafone New Zealand Music Awards and they’ve sold 50,000 tickets to their February 23 Western Springs concert which sold out in record time!

Fans should not delay when tickets go on sale at noon on Monday 17 December via Ticketmaster for the Dunedin show.