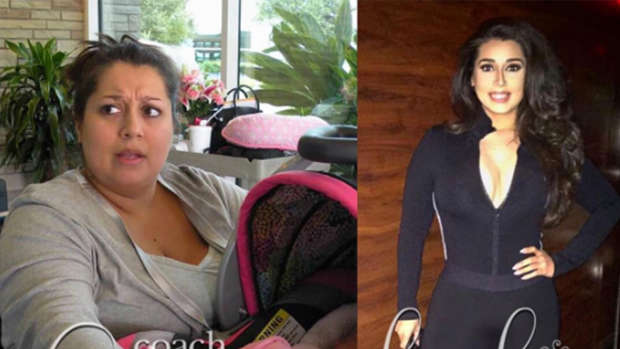 Only months after Betsy Ayala gave birth to a beautiful little girl, she discovered texts on her husbands phone from another woman that he was cheating on her with.

Not only did the text reveal the affair that was going on, but they also were making fun of Betsy and her weight.

Instead of taking the usual route of taking the kids, and burning down the house, Betsy decided to keep a cool head and progress in a more productive manner - something that she's thankful for now.

According to Betsy, she had been trying to get in shape before the whole ordeal.

"I started in September and was doing okay until two days after Christmas, when I found out my husband was cheating on me with a co-worker," Ayala told Honey.

"I had been with him since I was 17 and pretty much devoted my life to our relationship and him.

"I was devastated. I found out through some messages I read on his Facebook where they were calling me a cow and fat and just trashing me and my whole world fell apart," Betsy added.

"I didn't know what to do with myself at the time. I was still over 100kgs with a six-month-old and everything that I had worked for had just vanished."

Transformation Tuesday 🙌🏼 So guess who's at a new low 🙋🏻 This girl right here 🙅🏻 A month ago I was kind of in a funk and had gained over 10 lbs ... I think for me it's harder to come back and get back to it after gaining some of the weight you lost then when you first start. You feel discouraged and it sucks BUT quitting is not an option. I refocused the last month with our summer challenge and there you have it I'm at a weight I haven't been at since my freshmen year of college ... "I may be a lot of things but I am NO QUITTER" 👑🐝❤️ -------------------------------------------- #21daysummerchallenge #lightthematch #alwaysinpursuit #noquitters #joinmyteam #Herbalife #herbalife24 #queenb #getfitnowaskmehow #relentless #fitmom #fitchick #girlswholift #momswholift #motivation #noexcuses #bestlifeever #consistency #fitness #fitspo #weightloss #transformation #bodyafterbaby #wellnesscoach #fueledbyherbalife #boss #mommymakeover #weightlosstransformation #beforeandafter

Ayala decided to cut sugar out of the equation completely, and start attending her sister's zumba classes.

Two years down the track, she is now a herbal-wellness coach for others trying to lose weight.

And she is thankful for the whole experience.

Happy #TransformationTuesday !!! Hi! 🙋🏻 I'm Betsy and im a 34 yr old mommy 👧🏻. Some of the questions I get asked a lot. HOW? I struggled with my weight my whole life but there was a point in my life 3 years ago that I was at my heaviest over 262 lbs and I now had this little girl who was going to look up at me every day and I decided that was IT ... at the same time I also came across #Herbalife and I truly believe it was put in my path at a time when I needed it most. I started the products, changed my eating habits and got active. WHY? A lot of people ask why now? Well I started when my daughter was 3 months old at first just on the products because I was a new mom dealing with some pretty severe post partum and I had no desire to eat or cook or function but I was a mom so I needed to do something and the shakes were convenient and effective. Shortly after I had some things happen in my life that shook my world and I decided to kick it into high gear and working on myself became therapeutic for me. NOW? Yes I have loose skin and stretch marks but I work out 6 days a week and eat well so its gotten better and my plans are to have a #mommymakeover in the future. I'm also a wellness coach and have clients all over the world who are also changing their lives the same way I did. MOTIVATION? My daughter, my before pictures, my life at a Size 22 etc. The way you love and respect yourself sets the tone for the way you will let others love and respect you PERIOD. That self love is not about a certain weight or size but about me being comfortable and happy with me physically and mentally. When I know I'm giving 100% to my life I can expect my life to give me 100% back. -------------------------------------------- #transformationtuesday #lightthematch #alwaysinpursuit #joinmyteam #Herbalife #herbalife24 #queenb #getfitnowaskmehow #fitmom #fitchick #girlswholift #momswholift #fitness #fitspo #weightloss #transformation #bodyafterbaby #wellnesscoach #fueledbyherbalife #mommymakeover #weightlosstransformation #beforeandafter

"I would cry after every workout and it was then that I decided that this would not define me and I was going to change for me and for my daughter. I wanted her to be proud of her mum and I wanted to be an example for her,"

"I was always the chubby kid," she said.

"I never played sports or wanted to take in physical activity because I was overweight. I did get bullied in school and got picked on. I think for me eating was like self-medication,"

Despite her past, the inspirational figure isn't letting anything get in the way of her journey to a better self.

"I'm a completely different person both on the inside and outside because of my outlook on everything. I was always very negative and had a chip on my shoulder because I was unhappy with me. I'm happier, I'm confident and most of all I'm positive,"