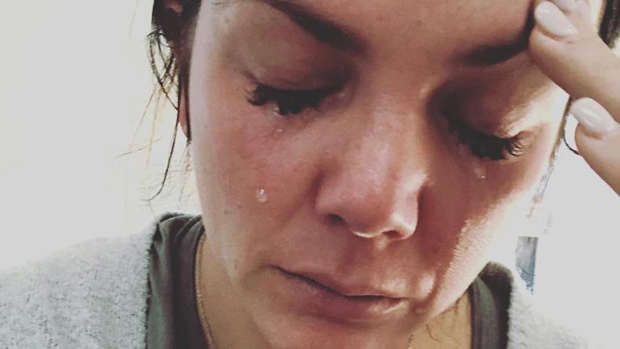 There's no denying marriage is hard work ... but it typically gets even harder after you have kids.

And one refreshingly honest Australian mum isn't afraid to open up about how having children has affected her 10-year relationship.

Taking to social media, mummy blogger Mel Watts has gone viral with her extremely "raw" Facebook post in which she dropped the facade that family life is running smoothly.

Alongside a photo of Watts, her husband Nolan and their four children - Ayden, 12, Ivie, six, Indie, three, and one-year-old Sonny - the 31-year-old from New South Wales wrote: "Husband. Wife. Roommates? If someone told me years ago that my relationship would one day change, I would have laughed and said no way."

"I write this from a very raw part of my heart. The other night I lay there crying for unknown reasons [okay, maybe not unknown – the utero was having its monthly party] as I tried to go to sleep."

"It is no one’s fault. It's just a moment in our life where I can say – it’s not all roses and handcuffs."

"The long date nights have gone. The sleep-ins are non-existent. The surprise weekends away, we can no longer afford them. The new underwear – seriously who even made edible underwear 'excuse me whilst I finish my mouthful of cotton candy, s*** I’ve got a hole in my tooth, that hurt'…. Completely impractical," she added.

"The long hot showers, are now lukewarm and we're tag-teaming kids in between. The late nights are now laying there silently with our backs to each other hoping the other one will get up for the crying baby."

"The text messages that use to read about how much they love you and why. Now they're more likely 'Babes got my period, get pads - wings. Don't forget the bloody wings. Hazelnut magnums, not the minis that means I have to eat three, I’d rather just eat two big ones. And whatever you and the kids want for dinner. Can’t cook dying.'"

"The spray tans and shaved beaver are now for birthdays, nights out and possibly [I mean possibly] because I just simply feel bad for him."

The mum-of-four went on to admit that having kids puts a "damper" on relationships, but she wouldn't change it for the world.

"Children are hard work. They do put a damper on things. Some people may be able to keep their s*** together but some people, like us, we find it hard to balance. The children have become the number one priority and at some point, we need to learn to put our relationship towards the top of that priority list."

READ MORE:
• Aussie mum left shocked after her son shares eerie memory of being 'in her tummy'
• According to science husbands cause mums to stress twice as much as children!

"I think in time it will become that way again. You have to make it past these difficult times to get there. It’s not that it’s even difficult, it's just different. And sometimes different is really hard. Things have changed. Have they changed for the worse?"

"No. I don’t think so. I think this moment in our lives is where we need to be right now. I am still very very much in love with my husband. It’s just a different kind of relationship now. It’s commitment. It’s contentment. It’s frustrating. It’s repetitive."

"It’s another chapter in our life. I know not all people go through this. But I have. I think it’s normal and I also think that I can't be alone in this. Surely there are other people out there who feel the same?"

"It’s very much alive but it also has another 3 humans involved it’s not as easy anymore. Do I think he deserves more? Of course I do. He deserves the world when at this moment all I can give him is a hairy, cranky wife," she wrote.

She continued: "Once you stop comparing yourselves to your old selves it becomes easier. Once you talk to each other about it you understand you’re both feeling the same way. Of course it’s worrying and of course it's scary. No one likes change, and no one expects change. But just like everything else in life – relationships change."

"SO here's to grey pubes [not yet] and sexless nights. No round two’s and nothing tight. I wouldn’t want to be old and saggy with anyone else!" she concluded.

The message resonated with a number of people and the post quickly went viral, with more than 6,700 likes and 1,200 shares.

Fellow parents took to her comments to praise Mel for being so open, one wrote: "Well done for saying what so many of us are struggling with. You've made me feel so much better."

"This is the most insightful raw and honest posts I have read lately. Big love to you and yours babe. And a big thank you for the food for thought," said another.

A third shared: "Thank you for putting into words what so many of us are feeling. My NYs resolution was to be a better wife....I’m still working on it."