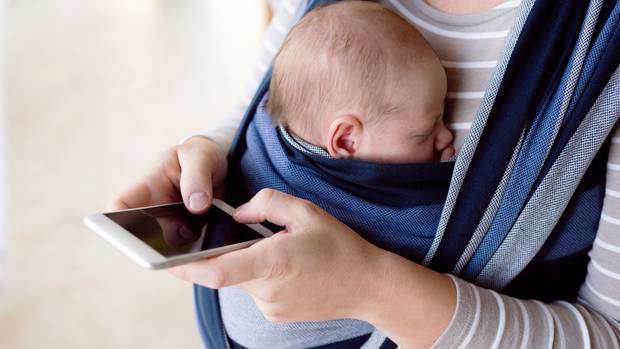 Someone emailed me recently and told me that the problem with today's kids are that their parents are always on their phones.

Thank you so much Ken from 1800. You probably didn't lift a finger with your own kids because your wife did it all.

Countless times, I've been out somewhere and another mum has said to me: "Oh, look at me, on my phone," guiltily tucking it away in between running around after her kids - who she has spent a morning with at home, whose bums she has wiped, tummies she has filled, bodies she has clothed, and who she has successfully got to a park for some fresh air and a run-around.

Now, excuse me for ignoring all the studies about how parents are ruining their precious kids' lives by touching their mobile phone while they are within 10 kilometres of them, but next time someone tells me it's phones ruining kids today, they are going to get my phone shoved somewhere painful.

I make no apology for being on my phone in front of my kids.

Recently, I went to a swimming lesson and spent the bulk of it on my phone. Another time I read my newspaper, in between glances up and the odd thumbs up.

Oh, I wasn't watching my kid for every second of his swimming lesson! His life is ruined because I didn't etch every movement into my memory for eternity!

I am so sick of people making out like you have to watch every second of your kids' lives.
I have seen every milestone. Well, I assume I saw their first steps, maybe it was their second steps and I was on my phone for their first ones. Does it really matter?

I have seen so much of them – including a stack of things I never wanted to see.

Did you know, Ken, I watched my son sing "happy birthday" to his penis while he was in the bath the other night?

Kids these days get more attention than ever. What happened back in your day when parents were so much better, Ken? Your wife couldn't have engaged with your kids all day either, you know, in between washing all the cloth nappies without a washing machine, cooking dinner and sewing clothes and cleaning the house and, you know, somehow surviving without contraception and having a billion children. How much precious time did you really give your kids?

They basically raised themselves and you're judging us for a few minutes on our phone?

Sometimes, as a toddler has an epic meltdown that nothing seems to help, pulling out my phone for a mindless scroll (or hunt for a solution) gives me just enough space to come back to the situation with a new approach.

Sometimes messaging a friend and hearing they are having the same crappy day has been the difference between me snapping or having a meltdown myself.

If I'm at a park with my kids, sometimes I'm there because I've catered to every relentless demand they have had all day.

Sometimes getting outside is the only thing I can think of so I can (semi) ignore them for a bit. So, if you see me on my phone, remember: Maybe I am taking a photo of them and sending it to their dad while he works, or to their grandparents who all live in other regions and only get to see them twice a year.

Perhaps I am paying a bill, or organising another outing my kids will get to enjoy with me more fully "present".

Maybe I am checking my social media which, some days, is my only link from what can be isolating days with kids to the outside world.

Or maybe you could just realise that it's not up to you to care how much I'm on my phone when you're judging me on just a tiny fraction of my day.