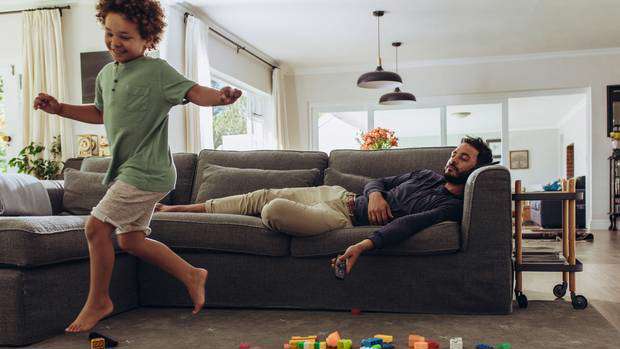 With the school holidays in full swing, many parents across the country are desperate for a break, however small.

One genius dad has come up with the perfect solution to get a few minutes "shut-eye" while keeping the kids safe and entertained.

A viral post on Facebook shows Michael Weber lying on the sofa, getting what is undoubtedly some well-earned rest, while his kids sit in front of him, drawing quietly.

How did this genius achieve that? Simply by telling the kids to draw him while he sleeps.

While it is not a trick that will work many times, it should work at least once and, at this stage, anything is worth a go.

His wife, Monica Weber, posted the image to Facebook, explaining how "the most brilliant man" she's ever known got the kids to play quietly.

"He has them doing 'realism art' while he 'poses' aka naps," she wrote on Facebook. "The winner gets a chocolate, but let's be honest, @michael.w.weberjr is the one winning," she added.

After the post went viral, with thousands of people commenting and sharing, his wife edited, explaining the situation further.

"He had just come off a 12hr shift as an OR nurse and I needed some groceries but it was cold/snowy outside and he insisted I go without the kids to make it easier. Between his time in the military and job as an OR nurse he is the lightest sleeper ever," she wrote.

"The two oldest are more than capable of letting him know if something needed his attention although he would likely wake up well before they even thought to wake him. I was gone maybe 20 minutes, no one was hurt, no houses burned down, no eyes poked out with pencils, I took the pictuce upon my return when all the kids shed me because they wanted to finish their drawing, I didn't pose the kids (if you know my kids they would do about anything for chocolate lol), everyone enjoyed their 'art break' and Mike took some stress off my plate while resting his eyes," the mum added.

"We never expected this to go viral, just sharing with friends who would get a laugh and know as mom I would NEVER get away with this, lol, so giving Mike credit where credit was due. Our kiddos are not perfect, there are plenty of days we face all the same challenges every other 'big' family faces who try to find balance between work, family, and life. That's why these little moments are worth celebrating."