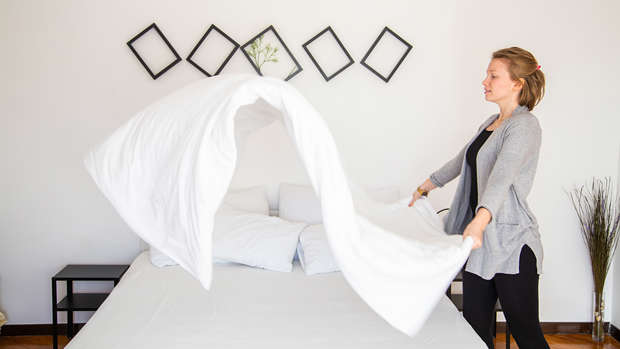 Kiwis travelling abroad will know the feeling: you arrive at your Airbnb and slide into bed only to find yourself pressed against a duvet of questionable cleanliness. The horror. There is no top sheet.

It's an essential part of many Kiwis' sleep routine because, well, isn't it a bit grubby otherwise?

We share our love of the crisp linen barrier with our Australian cousins and one confused German traveller has sparked a debate across the Tasman after finding herself flummoxed by the bedroom basic.

Jenny Blenk, 20, a German living in Brisbane, made a list of 11 traits and items she'd noticed in Australia that were slightly strange compared with her home in Europe.

One of Blenk's dilemmas was how Aussies make their beds, with the simple task sparking a lot of confusion.

"Wherever I go the blanket is tucked under the bed," Blenk said.

"You slip in and you can't really move because the blanket is tucked in. Then they have another layer of blanket over it to make it even more secure.

"They have not one sheet but two. One goes over the mattress ... which we do in Europe ... but I've never seen anyone have another sheet on top of this. I don't get it ... why would you need two sheets?"

"We have two sheets on the bed and so do most people I know. We wash the sheets once a week. Cannot imagine having a blanket next to my skin. How often do the people with only one sheet wash their blankets? Must get a bit stinky after a while," a reader argued.

"I suspect duvets are very popular in Germany, thus I can understand where she's coming from. Recently on a camping trip, I convinced management to do away with the top sheet and simply rely on the duvet. Lo and Behold, she agreed, even stated it benefits her as less washing," another said.