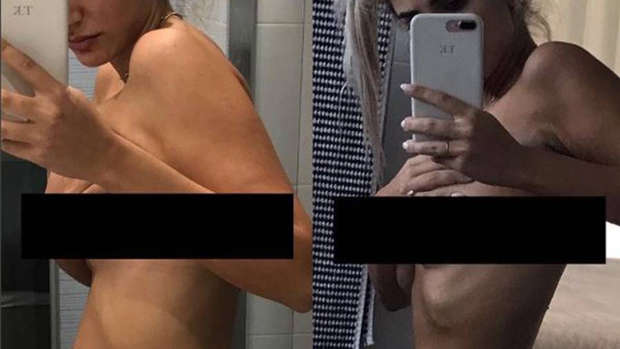 A 27-year-old has taken to social media to share what it really is like to live with endometriosis.

Thessy Kouzoukas shared selfies on Instagram to prove that the disease is "no joke".

Kouzoukas says treatment for endo has sent her into early menopause as it stopped the production of female sex hormones in her body.

"The left is my stomach three weeks after a ruptured cyst (five weeks ago) The right is me now, on a drug called synarel that has stopped all my hormones and sent me into menopause at the age of 27."

This is quite shocking to people. This is me. This is endometriosis. I never intended to share these photos hence why I'm naked, but my god I can't believe the amount of DM's I've received from girls who have endo too and feel alone. The left is my stomach 3 weeks after a ruptured cyst (5 weeks ago). The right is me now, on a drug called "synarel" that has stopped all my hormones and sent me into menopause at the age of 27. My upcoming trip to Greece along with this drug is in hopes to get me prepped and in the best condition both physically and mentally for an operation I'm receiving in late August. Endo is no joke. I'll be operated on for 7+ hours and hospitalised for a week. Please, spread the word about endo. And If you know anyone with bad period pain PLEASE tell them to get checked for this. And to my girls with endo.. you're not alone ❤️

She urges anyone who thinks they might suffer from the same condition to see a doctor.

Kouzoukas has been taking Synarel, a drug used in the treatment of endometriosis. It works by reducing the body's production of oestrogen.

The lower oestrogen production has the tragic side-effect of sending the woman into early menopause.

Doing the @fitazfk 28 day challenge in preparation for Greece. I feel so lucky to be going to Greece this year, with my rupturing cysts I was too scared to travel. It's been a rough couple of months with a lot of uncertainty with my endo, a failed IVF cycle, 2 ruptured cysts but with healthy eating, exercising, a hormone suppressing drug and a bit of hope I have convinced myself I'll be fine to travel 👊🏽 yolo bitches!

The Instagram posted received more than 1000 comments, with many thanking the blogger for spreading awareness of the invisible disease.

"The more we advocate for Endometriosis, the more women can get help and not have to suffer in silence," one Instagram user said.

"Endo is just a terrible beast so hard to explain to people. From the countless hospital stays, surgeries, endless bleeds just terrible misery," another user said.

The fashion blogger is now preparing to embark on a trip to Greece where she will have surgery to treat endometriosis.

The procedure is expected to take seven hours.