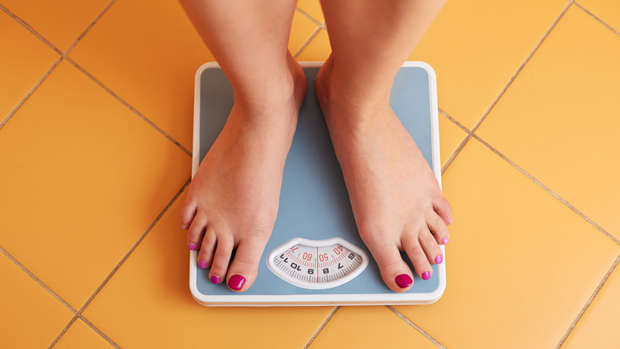 Liz is a typical 50-something woman, fit, 70kg, 30 per cent body fat. She goes to the gym every day, and runs for 35 minutes on the treadmill at 10km/h. But, as she tells me rather often, she can't lose weight. So what's going on here: is it Liz, or is it the universe conspiring against her?

How do you actually 'lose weight'?

Let's start by considering the body as a store of energy. The body can be divided into two components. One is fat mass, and the rest is called fat-free mass. It's mostly water, but there's also bone and muscle protein. Fat contains much more energy (and thus requires more energy to burn).

Like most of the adult population, Liz wants to lose weight. To do this, she has to go into energy deficit: energy out must be greater than energy in. The amount of weight she loses will depend on whether she is losing fat or fat-free mass.

For most people, it takes an energy deficit of about 27-32 kJ to lose a gram of body weight. If Liz runs for 35 minutes at 10km/h on the treadmill, she has a deficit of about 1500kJ, so she will have lost only 50g in a session. If she does this five times a week for a year, however, she will lose more than 12kg.

Except, of course, she doesn't. After a year she's still stuck on 70kg. Why?

Eating more to compensate for exercise?

The first possibility is that Liz is eating more to compensate for the extra exercise. Her 35 minutes of treadmill running will be entirely undone by a glass and a half of merlot that evening.

There is some evidence people use food to reward themselves for exercising. A recent analysis suggested women may be particularly prone to fuelling up after exercise. So Liz may be unconsciously munching or drinking away that energy deficit.

A second possibility is that Liz compensates for going to the gym by being less physically active elsewhere. She may flop down in front of the TV rather than busying herself with chores. She may even fidget less.

This theory is known as the "activitystat" hypothesis: the idea that we have a set point for energy expenditure like the set point on a thermostat. If we increase physical activity in one domain, there is an automatic compensation in another.

So is Liz undoing all the good work at the gym by couch-potatoing through the rest of the day? We tested this rather depressing theory. Readers will be pleased to know we found no evidence for the activitystat when sedentary adults started an exercise programme. They just cranked up the exercise, drawing time from sleep and TV.

A reduction in your resting metabolic rate?

One of the unfortunate side effects of losing weight is resting metabolic rate — the rate at which you use energy when you're sitting doing nothing — starts to fall, meaning you burn less energy.

A recent study of contestants on The Biggest Loser found their resting metabolic rate was depressed six years after having lost and regained most of the weight.

A sunnier prospect may be that although she has not lost weight, she has lost body fat, and that body fat has been replaced by fat-free mass. A kilogram of fat occupies more space (about 1.1 litres) than a kilogram of fat-free mass (about 0.9 litres), so Liz would not only be leaner, but smaller.

We can calculate that if fat mass is entirely replaced by fat-free mass, after 12 weeks Liz will have lost 2.6 kg of body fat, and gained 2.6 kg of fat-free mass.

This sounds good, but does it really work like this? A reasonable rule of thumb is that about 75 per cent of the weight you lose will be fat, and the rest fat-free mass. But things may go better if weight training is involved.

One analysis of previous studies found strength training (using weights or your own body weight) increased fat-free mass by about 2kg in overweight men and about 1kg in women, even though weight remained unchanged.

A good test of whether you're swapping fat mass for fat-free mass is just to measure your waist girth. If it's getting smaller while your weight is stable, then you're probably losing fat and gaining fat-free mass.

So what's happening with Liz?

Is it gluttony or sloth, or is she losing fat and replacing it with fat-free mass? Liz likes this last possibility, but I don't know. She certainly looks more toned, but the bottle of merlot is emptier than I thought.

This article was originally published on The Conversation. Read the original article.