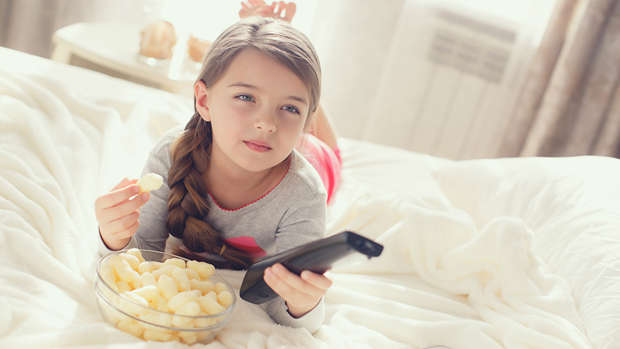 Girls who have televisions in their bedrooms are more likely than boys to become overweight, research has found.

Seven-year-old girls with TVs in their rooms have a 30 per cent higher risk of being overweight by the time they are 11 than children without their own television set.
For boys with a TV in their room the risk of becoming overweight goes up 20 per cent, the University College London team discovered.

The researchers, who tracked more than 12,500 British children, found more than half had TVs in their bedroom at age seven, reported the Daily Mail.

Researcher Dr Anja Heilmann, whose findings are published in the International Journal of Obesity, said: "Childhood obesity in the UK is a major public health problem," she said.

"In England, about one third of all 11 year olds are overweight and one in five are obese.

"Our study shows that there is a clear link between having a TV in the bedroom as a young child and being overweight a few years later."

The children, who had all been of a healthy weight at the age of three, were more likely to have higher overall body weight and an increased percentage of fat in their body.

But the impact was significantly greater for girls than boys.

The more TV girls watched, the more weight they put on - although the same was not found to be true for boys, who seemed to just put weight on if they had a TV in their bedroom and then stay the same weight no matter how much they watched.

Dr Heilmanm thinks this is because young girls tend to be far less physically active than boys.

"If you watch children watching TV boys tend to jump around and bounce on the sofa and not sit still. They move around. Girls don't do that."

Lack of sleep to blame

Dr Heilmann said keeping a television in the living room allows parents to supervise how much their children are watching.

She added: "I strongly suspect that lack of sleep might play a role in this.

"If they have a TV in the bedroom it might be that they could watch it until late at night and don't get enough sleep.

"Other research suggests a link between lack of sleep duration and obesity."
Encourages snacking and less exercise

Other possible theories for the link include children snacking more while they watch TV, seeing more junk food adverts and simply sitting around more.

The researchers tried to take the amount of exercise children did into account - but admitted this was a "crude" calculation and did not include informal play and running around.

Nevertheless, they are convinced bedroom televisions independently raise the risk of a child being overweight, no matter how much exercise they did.

Dr Heilmann said: "We found that having a TV in the child's bedroom was an independent risk factor for being overweight and increased body fatness in this nationally representative sample of UK children.

"Childhood obesity prevention strategies should consider TVs in children's bedrooms as a risk factor for obesity."

Dr Heilmann admitted far more research is need on the exact link - especially in a digital age in which children may watch television shows on smartphones, tablets and laptops in their rooms, not just on old-fashioned TVs.

"The causes of overweight and obesity are complex and multiple," she said.

"Screen time is part of the bigger picture and further research is needed among older children and adolescents, as the use of screen-based media including computers, mobile phones and tablets increases with age."

Health experts are desperate to reduce the burden of child obesity, which they think will lead to booming numbers of people with cancer, diabetes and heart disease in years to come.

"We know that high levels of screen time expose children to increased risks of being overweight on a number of fronts, creating a damaging combination of a more sedentary lifestyle, increased exposure to junk food advertising, disruption to sleep and poorer ability to regulate eating habits when watching TV.

"As the study indicates, more research is needed to fully understand this complex area, but this is a high quality study covering a very large and nationally representative sample and provides a reasonably strong basis to think that the links shown here are real.

"It highlights that having a TV in the bedroom from seven years increases the risk of being overweight four years later, regardless of the child's weight in earlier childhood.

"As such the findings must be taken very seriously."