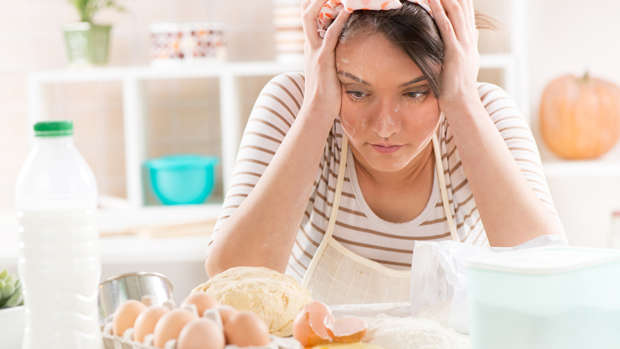 It only takes a couple of sunken cakes, cracked scones or raw brownies for many cooks to dismiss themselves as poor bakers.

But baking experts have now revealed that these problems are more often than not caused by very common mistakes that can easily be fixed, according to the  Daily Mail.

From not measuring ingredients accurately to using the wrong size tin, there are many reasons why your bakes don't turn out the way they should.

But if you follow this advice and look out for tell-tale signs, then you should become a better baker almost instantly.

The advice, from the Cookery Team at Good Housekeeping Institute, reveals that most baking issues come from not following the recipe to the letter.

From substituting ingredients to putting the oven at the wrong temperature, these little mistakes can lead to a kitchen catastrophe.

But there are other issues that may not be spelled out in the cookbook you are using that are just as important to avoid.

Mixing ingredients straight from the fridge, not preparing the cake tin properly and using out-of-date raising agents could also spell trouble for your delicious bake.

Learn how to avoid bothersome bakes and instead produce cakes Mary Berry would be proud of by reading the tips below.

If you're an inexperienced baker, don't try to swap one ingredient for another as they can work in very different ways.

Oil, for example, works very differently to butter, as it's denser and makes cakes moister than butter. It also can't be substituted gram for gram.

The type of sugar you use will also make a difference. Don't try using granulated sugar instead of caster as it will make the texture grainy and crunchy.

2. INGREDIENTS NOT AT ROOM TEMPERATURE

Eggs that are too cold can curdle in a cake mixture, while butter won't cream properly if it's chilled.

Make sure everything is at room temperature before you start baking by taking out ingredients an hour before you need them.

There are ways of speeding up the process, though. Microwave butter for 12 seconds, ensuring you watch it like a hawk so that it doesn't completely melt, in order to soften it.

For eggs, Good Housekeeping recommends putting uncracked eggs in a bowl of warm water for a few minutes.

When a recipe specifies that you need a certain sized tin, there's a reason for that, so think twice before using whatever you have to hand.

If the tin is too small, your bake may burn at the top or overflow, and too big, and it may not rise properly.

Another issue many people find is if they haven't prepared their cake tins properly. Sponge cakes don't need a thick layer of grease, and over-greasing the tin can result in dark crunchy edges.

Only fruitcakes, deep sponges and brownies need a thick layer of oil or butter on the sides of the tin as otherwise, they will stick.

Otherwise, use a circle of baking parchment or greaseproof paper to ensure you can get your cake out of the tin in one piece.

4. OUT OF DATE RAISING AGENTS

You may think raising agents such as baking powder or bicarbonate of soda last forever but in fact, they have an expiry date just like most other foods.

If a baking agent is past its use-by date, your bake may not rise well. Check to see if it's past its best by mixing 1 tsp with 4 tbsp of hot water. If it bubbles up immediately, then it's good to use. If not, chuck it away and buy yourself some more.

5. MEASURE ACCURATELY AND FOLLOW THE RECIPE TO THE LETTER

You may not think that accidentally adding too much sugar or flour will make much of a difference to your bakes, but in fact, it can hinder the quality of your delicious treat.

Use digital scales for accuracy and use calibrated measuring spoons rather than the teaspoons and tablespoons in your cutlery drawer.

Another mistake people make is not following a recipe to the letter. But if your recipe says you should mix together for five minutes, there will most likely be a scientific reason for doing that. Mixing for less or more time could ruin your bake.

6. TAKING TOO LONG TO PUT A CAKE IN THE OVEN

If you find that your cakes don't rise properly or have holes in the top, then you may not be putting your bakes into the oven quickly enough.

When you beat together ingredients, you are whisking air into the mixture which will deflate with time. When the baking agent is added, this ingredient will also start reacting with the mixture even before you get it in the oven.

It's important to be prepared and ensure the oven is at the perfect temperature before you start so that you don't have a flat-as-a-pancake bake.

Sometimes, it's not you, it's them. Not every recipe is reliable, so turn to cooks and websites you can trust.

When you become a more experienced baker, you will be able to look at a recipe and figure out if it will work or not.

This is an all-too-common mistake by people who want to check on how their bakes are doing.

But as curious as you might be, don't touch that oven door.

If you open the door too early, you can be sure of a sunken cake, so make sure at least three-quarters of the cooking time has passed before you take a peek.

If it's not cooked when you first check, don't keep opening the door every minute after that. Allow at least five or 10 minutes to pass before you look again as otherwise, it can start sinking.

If your cake is starting to brown on top but is still raw in the middle, try covering the top of the tin with foil for the rest of the cooking time, Good Housekeeping advises.