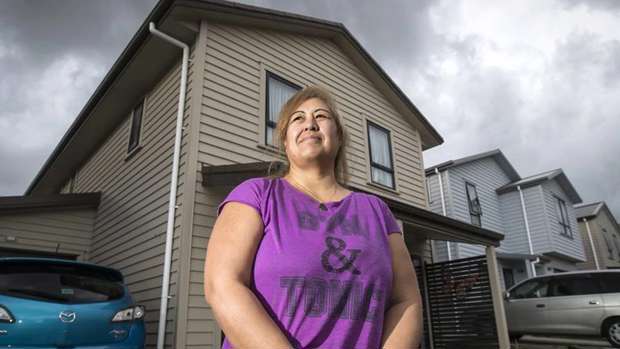 Jackie Harrison says she is one of the lucky ones. She is a solo mother of four who owns a house in Auckland.

But her path to home ownership was bumpy, and she only made the leap with some innovative support.

Harrison, a public health worker, moved from Wellington to Auckland 15 years ago to be near her family after her marriage ended. She found the cost of renting was increasingly unbearable in the city.

"Rent was significantly going up every year. For a four-bedroom home, it was costing at least $580 a week. That takes a chunk out of my single income, and it was really difficult to support my family.

"It could come down to not having as much food in the cupboard, not going out or doing any activities, not being able to pay for school books for the kids, or sports activities."

After re-training, she was able to cover her rent more comfortably but home ownership was "totally out of the question" in Auckland's inflated housing market.

In 2015, she was thrown a lifeline by the NZ Housing Foundation, which helped her to buy a newly built four-bedroom house in Weymouth, South Auckland, through its shared ownership scheme.

She used her $30,000 in KiwiSaver savings and a KiwiSaver first-home grant to cover some of the deposit, and the foundation paid the rest. She now co-owns the house with the foundation, and her mortgage payments are capped at a third of her income.

Such schemes are relatively rare in New Zealand, but are increasingly being used by community housing groups to get low-income families into secure housing.

Harrison stresses that she's lucky. Many others in South Auckland are still struggling with the cost of housing, she says.

"If you walk down the main street of Manurewa, you will just see homeless. You can see families parked up, with kids.

"I grew up in the area, and it's the worst I've ever seen it. We need more houses, built more quickly."

In a sign of how tough it is for others to get on the ladder, her home's value has risen by $200,000 in the two years since she bought it.