Mainlanders rush out to buy more energy drinks in the lead-up to Christmas, while North Islanders leave that all-important gift wrap as their more common emergency purchase.

Residents of the more traditionalist southern area of New Zealand stud their hams with pungent cloves while northerners down theirs with mustard. And when it comes to the main dish, guess who prefers roast turkey to salmon?

The South Island might be renowned for producing prime legs of lamb but it's North Islanders who are more likely to serve that treat around Christmas. 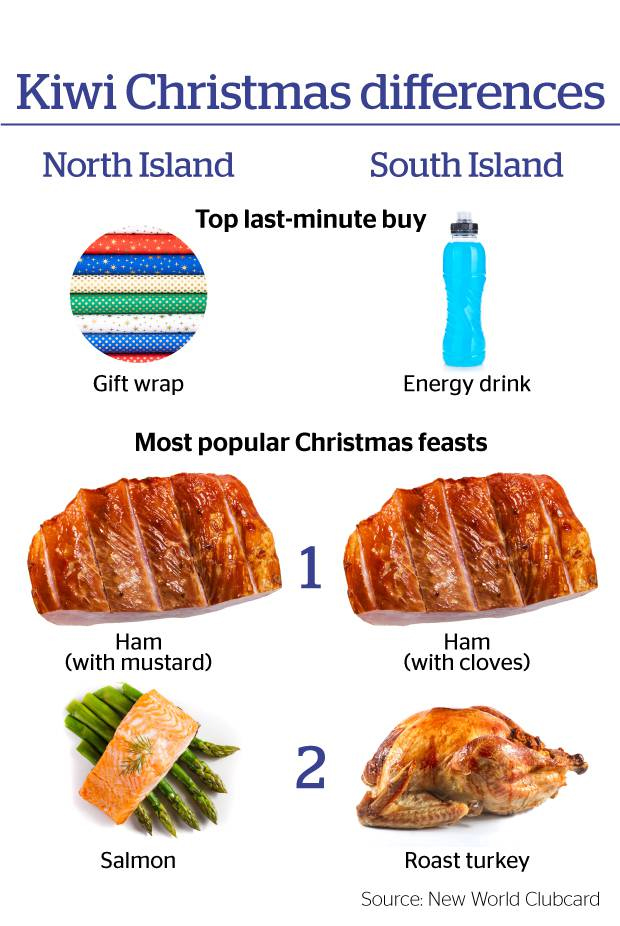 "It's not just the protein that differs between islands, it's also all the condiments and bits and pieces that go with it. Southerners are more likely to opt for the traditional clove- studded ham while North Islanders roll out the hot English mustard for an added kick on Christmas Day. Northerners are twice as likely to add a couple of relishes to the festive table for their ham," Foodstuffs said.

Ashley described many differences and was even more specific about regional variations.

"Wellingtonians prefer to create a barbecue meal based around a roll of eye fillet or salmon than any of the traditional meats but families in Masterton are more partial to turkey for their Christmas festivities," he said.

Salmon is the meal of choice for Aucklanders.

"The North Shore [residents] are high consumers of meat at Christmas preferring to have eye fillet or beef roasts as part of the Christmas meal and like to include a traditional Christmas pudding for dessert," he said.

"The Far North loves lamb and sausages for Christmas and also have a sweet tooth as one of the largest regions to choose pavlova and cream for dessert," he said.

Residents of the Waikato are big fans of the leg of lamb, eye fillet roll or beef roast as well as loving a pavlova for dessert.

"Cherries and strawberries are the top choice for Aucklanders and help bump bananas off the top grocery product list in December.Taranaki [residents] love a glazed ham at Christmas with salads and seasonal vegetables and for dessert, it's everyone's favourite pavlova," he said.

"South Canterbury is also very traditional with their Christmas meals; turkey and ham. However, a leg of lamb is the number one choice. Christmas pudding is their dessert to end their meal," he said.