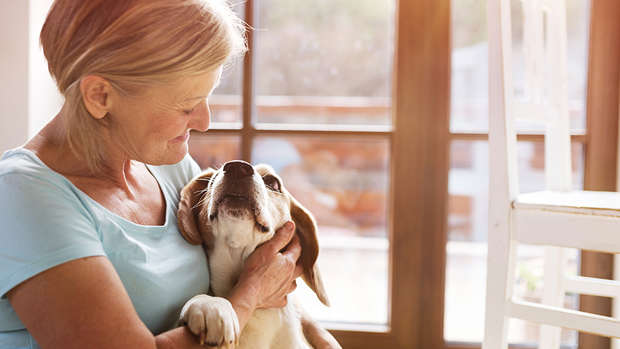 Owning a dog slashes the risk of suffering a premature death by a third, new research reveals.

Older people who live alone are 33 per cent less likely to die over the next 12 years if they have a dog, according to a Swedish study of more than 3.4 million elderly people, the Daily Mail reports.

The biggest impact is in heart disease, the world's greatest killer, with owning Britain's favourite pet reducing early deaths rates by a staggering 36 per cent, the research adds.

Researchers believe canine pets also help to lower loneliness, which has been described as 'akin to a chronic long-term condition' and linked to disorders including heart disease and dementia.

As well as offering companionship and boosting non-human interactions, dogs also encourage their owners to exercise via walks, the researchers add.

Dogs may also strengthen humans' gut bacteria, according to the researchers, which has previously been linked to a stronger immune system and maintaining a healthy weight.

Man's best friend is the most popular pet in the UK, with 24 per cent of people owning a dog.

How the research was carried out

Researchers from Uppsala University, Sweden, analysed health records and dog ownership information from seven registries on individuals aged between 40 and 80 with no history of heart disease.

The study's participants were followed between 1 January 2001 and 31 December 2012 or until they died, if that was sooner.

In Sweden, every hospital visit is recorded in national databases where they are then made accessible to researchers after individuals are made anonymous.

Dog ownership registration has been mandatory in Sweden since 2001, enabling scientists to uncover pet ownership with any later diagnosis of heart disease or death from any cause.

Lead junior author Mwenya Mubanga said: 'A very interesting finding in our study was dog ownership was especially prominent as a protective factor in persons living alone, which is a group reported previously to be at higher risk of cardiovascular disease and death than those living in a multi-person household.

'Perhaps a dog may stand in as an important family member in the single households.

'Another interesting finding was that owners to dogs from breed groups originally bred for hunting were most protected.'

Such breeds include Golden Retrievers, Irish Setters and Beagles.

The findings were published in the journal Scientific Reports.

Research has long associated dog ownership with good health but this study is 100 times larger than any previous trial of its kind, he adds.

Professor Fall said: 'We know dog owners in general have a higher level of physical activity, which could be one explanation to the observed results.

'Other explanations include an increased wellbeing and social contacts or effects of the dog on the bacterial microbiome (gut bacteria) in the owner.'

'Dogs may be beneficial in reducing cardiovascular risk by providing a non-human form of social support and increasing physical activity.

'Dog ownership has been reported to be associated with alleviation of social isolation and improved perception of wellbeing, particularly in single persons and the elderly.

She said: 'One mechanism by which dog ownership could reduce cardiovascular disease risk and mortality is by alleviating psychosocial stress factors, such as social isolation, depression and loneliness - all reportedly lower in dog owners.

'These factors have been linked to increased risk of coronary heart disease, cardiovascular death and all cause mortality.'

Loneliness is 'akin to a long-term condition'

According to the Campaign to End Loneliness, an estimated 1.1 million over 65s in the UK are chronically lonely, and are therefore more at risk of developing heart disease and dementia.

Heart disease, which includes strokes, heart attacks and circulation problems, causes more than a quarter of all deaths in the UK, including around 42,000 fatalities among people under 75.

Worldwide, heart disease is the leading cause of death, accounting for 45 per cent - or more than 4 million - of fatalities in Europe in 2016.

In October, Professor Helen Stokes-Lampard, chair of the Royal College of GPs, described social isolation and loneliness as 'akin to a chronic long-term condition' in terms of the impact on patients' health and wellbeing.

She said: 'GPs see patients, many of whom are widowed, who have multiple health problems like diabetes, hypertension and depression, but often their main problem isn't medical - they are lonely.'

Research has shown lonely people have a 50 per cent higher risk of early death compared to those with good social links, making loneliness as deadly as obesity or smoking 15 cigarettes a day.