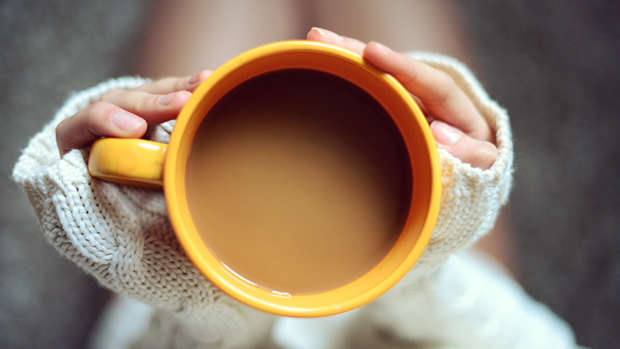 Every day seems to deliver a new story about caffeine. One day it’s good for you, the next it’s to be avoided.

But a recent large-scale study suggests not only do coffee and caffeine give us an 'energy boost', they also benefit our health, the Daily Mail reports.

The British Medical Journal published an umbrella review that showed the health benefits of caffeine and coffee far outweighed the risks.

The optimum health benefits of caffeine come from about 3-4 cups a day, according to a piece by Healthista's Anna Magee.

According to Steven Meredith, a postdoctoral research fellow at The John Hopkins University School of Medicine, caffeine is ‘a psychoactive substance that crosses the blood-brain barrier and stimulates the nervous system.

In fact, caffeine is the most commonly used psychoactive substance in the world.’ Indeed, most people consume caffeine without any problems and its reputed benefits are proven in many scientific research papers. Here are just a few.

1. Yes, it makes you less sleepy

Our brains naturally produce more of a molecule called adenosine from the time we wake up until the time we go to sleep. Scientists think this helps us relax and get to bed at night.

Caffeine hijacks this natural process by mimicking adenosine in the brain. It latches onto the receptors designed for adenosine, pushing them out of the way. As a result, we’re left feeling more alert and awake.

But over time, adenosine makes new receptors for the sleep-inducing molecule to start latching onto again which is why you might need more and more caffeine to get the same effect.

Caffeine provides basically the same boost for athletes as it does for the rest of us struggling with Powerpont presentations. It does this again, by delaying feelings of fatigue as it blocks receptors for adenosine.

This means you can keep going for longer before you get tired —whether you’re driving a long-haul truck, prepping a PowerPoint, or going for the gold in the 400m sprint.

But whether benefits are from caffeine alone or coffee, aren’t clear. One 2013 study on cyclistsfound that both coffee and caffeine containing energy drinks boosted performance far better than placebos or decaf.

‘Caffeine is thermogenic,’ says Rick Hay. ‘This means it helps the body create heat and convert calories into energy.’

A study published in 2005 in Obesity Research investigated the effects of a green tea caffeine mixture as a weight-maintenance substance, for formerly overweight subjects, after weight loss.

4. It may reduce your risk of liver cancer by half

Drinking more coffee could reduce the risk of developing the most common form of primary liver cancer, according to a study led by the University of Southampton.

Researchers found that the more coffee consumed the greater the protection against hepatocellular cancer (HCC).

Drinking one cup more of caffeinated coffee a day was associated with a 20 per cent reduction in the risk of developing HCC, two cups more with a 35 per cent reduction, and up to five cups with a halving of the risk.

5. It could boost your long-term memory

Johns Hopkins University research indicates that caffeine may enhance long-term memory. Participants who were given 200-miligram of caffeine after studying a series of images were better at distinguishing these same images from similar ones when tested the next day.

‘We’ve always known that caffeine has cognitive-enhancing effects, but its particular effects on strengthening memories and making them resistant to forgetting has never been examined in detail in humans,’ said senior author Michael Yassa, an assistant professor of psychological and brain sciences at Johns Hopkins University.

This double-blind study was designed to reveal a deeper interaction between memory and caffeine. ‘Identifying these images requires the brain to make a more difficult discrimination — what we call pattern separation, which seems to be the process that is enhanced by caffeine,’ said Professor Yassa.

6. It could reduce your risk of Parkinson’s

A large number of population studies report a beneficial relationship between coffee/caffeine consumption and a lowered risk of developing Parkinson’s Disease.

Among them, were two meta-analyses that reported that the risk of developing PD decreased by 31 per cent in coffee drinkers compared to non-coffee drinkers.

Some of the individual studies found very strong risk reductions, up to 80 per cent with the consumption of over four cups of coffee per day.

7. … along with heart problems

Many researchers have assumed that caffeine could potentially cause trouble for people with heart problems like arrhythmias (irregular heart beats). But a recent review of research found this didn’t seem to be the case.

Looking at a number of studies with more than 330,000 participants, researchers found that irregular heartbeat frequency decreased between 6 and 13 per cent in regular coffee drinkers.

That same review found that people who’d had a heart attack who consumed caffeine (an average of 353 mg per day, or a little over 3 cups of coffee) actually had an improved heart rate and fewer irregular heartbeat issues.

The researchers think that by blocking adenosine, caffeine may reduce heart risks, since adenosine can trigger irregular heartbeats.

8. You’re not dreaming, it really DOES make you feel better

As a central nervous system stimulant, caffeine doesn’t just boost alertness, it can also improve your mood. This is due to the same adenosine-blocking effect that makes you feel alert.

9. Coffee can even reduce depression and suicide risk

Drinking several cups of coffee daily appears to reduce the risk of suicide in men and women by a staggering 50 percent, according to a large-scale study by researchers at the Harvard School of Public Health (HSPH).

Caffeine not only stimulates the central nervous system but may act as a mild antidepressant by boosting production of certain neurotransmitters in the brain, including serotonin, dopamine, and noradrenaline. This could explain the lower risk of depression among coffee drinkers that had been found in past epidemiological studies, the researchers said.