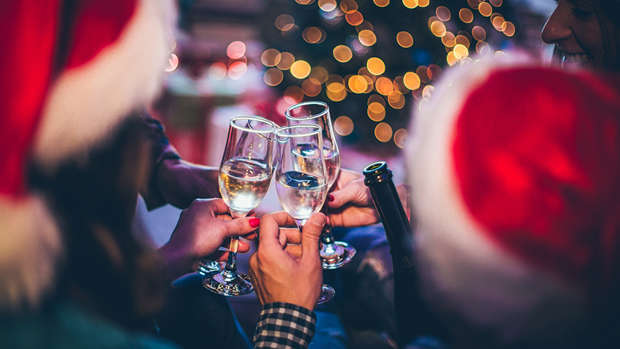 Tis the season to eat, drink and be merry but guzzling a few too many beersies could see you suffering much more than a regret-plagued hangover.

Massey University School of Sport, Exercise and Nutrition senior lecturer Dr Matthew Barnes said while the amount we drink often increases during the festive season, overindulging can pose a serious risk to our health.

So just how much damage can Christmas boozing do to our bodies? And what can we do to survive the silly season?

"As you start to drink more, it obviously increases your risk [of health issues] particularly if that drinking behaviour is regular," said Barnes.

These health issues included weight gain and an increased risk of stroke, diabetes and psychological disorders like depression.

According to the Cancer Society the risk of getting cancer, including mouth, throat, liver, bowel and breast, also increases with the amount of alcohol you drink.

Barnes said drinking alcohol was also known for decreasing the production of testosterone in males impacting their sexual functions.

It can also increase a man's production of the female hormone oestrogen.

"If you are consuming lots of alcohol over a prolonged period of time, in males it can lead to feminising effects, so an increase in body fat, shrinking of the testicles, a decrease in muscle mass," said Barnes.

Having one too many tequila shots after a hard year's work can also lead to the type of bad decisions that see you dancing on table tops or professing your love for a colleague.

"We start to back ourselves a bit more than we probably should doing things that are probably a bit unwise and we wouldn't do if alcohol wasn't in our system," Barnes said.

He said alcohol has detrimental effects on coordination, reaction time, decision making and the way we think about risks.

And the bad news is, after all is said and done there is nothing to speed up the effects of a hangover according to Barnes.

"It's more about being more aware of the risk you are putting yourself under and then making a personal decision to change you drinking behaviour."

With that in mind, here are Barnes' five top tips to avoid overindulging this festive season:

Stay hydrated
Being dehydrated will cause alcohol to have a greater effect on the body and brain. It is important to consume non-alcoholic drinks, such as water, between alcoholic ones, particularly in hot weather.

Eating is not cheating
Eat before and while drinking. This will slow down the absorption of alcohol so it has less effect on the body.

Pace yourself
It takes time for alcohol to be metabolised, so drinking rapidly will cause alcohol to accumulate in your blood meaning you will feel the effects faster.

Keep track
Drunk people are very poor at estimating how much alcohol they have had. Knowing your limits can reduce the risk of overindulging.

Beersies
Drink beverages with lower alcohol content like beer, which is better than consuming spirits such as vodka which is typically about 40 per cent alcohol.

Know when to say when - the cost of overindulging
Brain
•Upsets the normal activity of the brain, which has detrimental effects on coordination, reaction times and decision making.
•Can also increase the risk of depression and other psychological disorders as a result of its depressant effect and addictive nature.

Hormones
•Has a big effect on the way we regulate and secrete hormones.
•In males it can decrease the production of testosterone in the testes, which has flow on effects including decreasing your sexual functions. It can also lead males to produce more of the female hormone oestrogen, which can lead to feminising effects including an increase in body fat, shrinking of the testicles and a decrease in muscle mass.

Metabolism
•Drinking, even relatively small amounts, will see the body prioritise the removal of alcohol at the expense of metabolising carbohydrates and fat. Causes fat to be stored rather than used as energy.

Breast cancer
•Can increase your risk of getting breast cancer. Drinking alcohol is also linked to up to 30 other types of cancer including of the mouth, bowel and liver.

Can also increase the risk of stroke and diabetes