Ikea has gone above and beyond in order to attract parents-to-be with a new ad that doubles as a pregnancy test.

Swedish agency Åkestam Holst came up with the unusual promotion, which urges women to urinate on it in order to reveal a discount code, according to the Daily Mail.

"Peeing on this ad may change your life," reads the ad, which showcases Ikea's Sundvik crib and features technology similar to that of a pregnancy test — but with a twist.

If a woman urinates on the paper ad while she is pregnant, it will reveal the company's family discount for the crib.

According to Ad Week, the ad was created in collaboration with Mercene Labs, which had to make 'several technical advancements' in order for the coupon to work.

"The pregnancy test strip was used as a starting point, which relies on antibodies that bind to the pregnancy hormone hCG, resulting in a colour change," the agency explained.

"For scaling up of this technique and adopting it to the physical format of a printed ad, Mercene Labs has used their experience in development of surface active materials for microfluidics and medical diagnostics.

"Careful selection of materials, together with a controlled capillary flow have been crucial for the success of this project. Technical advancements made during the work with this campaign have the potential to improve medical diagnostics." 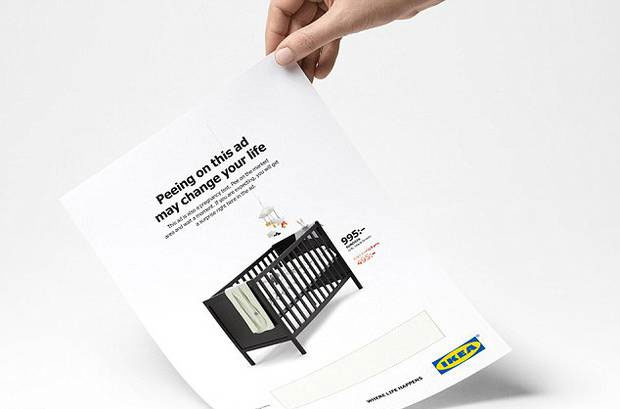 The ad is being featured in the Swedish women's magazine Amelia, but it's unclear how many people will be willing to try it out and bring the ad into the store when they're finished.

Of course, the cost of buying multiple pregnancy tests can quickly add up, and some people may be happy just to have the free test — although it has not been endorsed by any official medical bodies.

The ad has already started to create some buzz on Twitter, but many people can't get past the fact that women are actually being encouraged to urinate on the ad.

"Has no one at Ikea seen a pregnant woman before? They're pretty easy to spot without having them pee all over everything," Dylan Speed tweeted.

"Sure, there are lots of ads you'd love to pee on. But in this case, Ikea actually wants you to do it," someone else added.