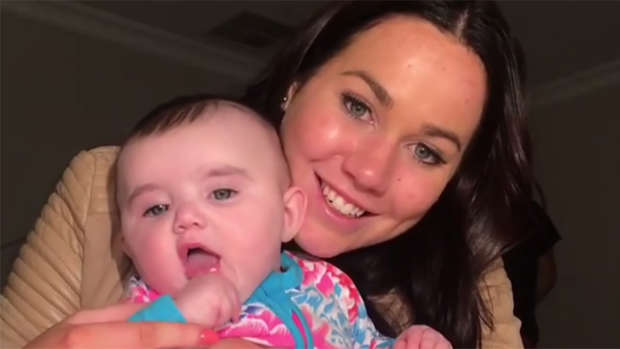 From changing nappies to learning how to swaddle and breastfeed, there are a lot of things that new mums need to learn - fast - after giving birth.

Burping your baby is one new task that can be hard to master, but a mother has hit on a method that she believes is 'foolproof' - and says it has worked on both of her young children, the Daily Mail reports.

Blogger Sophie Cachia, 26, from Australia, shared a video demonstration on her popular Instagram page, advising fellow mums to sit their baby on their lap, bend their knees and then raise their arms.

It differs from the usual approach to winding a baby, which sees parents placing them over one shoulder and gently patting their back. But Sophie says her trick - which she discovered entirely by accident - made her babies 'magically' burp.

But Sophie says her trick - which she discovered entirely by accident - made her babies 'magically' burp.

Sophia who runs The Young Mummy parenting blog, explained that she stumbled across her baby-burping method one day with her first child, Bob, and has been using it ever since.

She wrote beside the video: "Burping! So many questions, so many ways, so many 'she won't f****** burp' and 'he hasn't burped - should I take the risk and put him down?

"Simply (it's definitely not always SIMPLE, sometimes they arch their back and you need to use some gentle-but-firm mummy/daddy love to hold them in place) sit them on your lap and bring their knees bent in like so, and lift their arms up to about 90 degree angle.

"I'm not sure if it's because it straightens their back or opens up their body more, but I find my kids have just magically burped this way.

"They need to be calm though and body relaxed - hence the dummy because Flossy was screaming the roof off seconds before as she'd finished her bottle."

She added that she's not preaching that this is the only way to do it or forcing her method on people.

"I'm just offering some assistance and tips to try for new mums who may be struggling in this field," she explained.

"I know I certainly did before accidentally doing this."

At the end of her caption, she clarified to her 224k followers: "If worst comes to worst and they won't settle, it's because my kids are still hungry.

"Don't worry about how much you read your baby should be drinking, listen to YOUR BABY."

Sophie is famously no-holds-barred and open in her approach to blogging and sharing aspects of her life.

At the beginning of this year, she made headlines after live-streaming her labour with baby Florence, and she recently announced she is moving into fashion and is launching her own online clothing line.

"The idea behind CACHIA stems from my mix 'n' match bold fashion choices, as well as it being the epitome of my chaotic and (at times) very random lifestyle," Ms Cachia posted on the new 'About' section of her website.

The blogger also shared that a kids range, Bobby + Floss, named after her two children Bobby and Florence, will come soon.