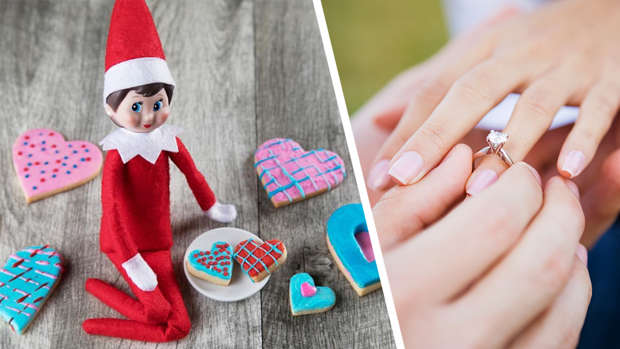 While Elf on The Shelf is generally used to entertain children in the lead up to Christmas, one man has been slammed for using it to propose.

His bride-to-be proudly shared the news in a Snapchat to a friend - who then shared it to the Facebook group, That's It, I'm Proposal Shaming - where it was quickly branded "tacky and childish".

One member asked why her unnamed fiancé was not "man enough to do the job of proposing himself," instead of using a Christmas toy. "When you're not man enough to propose yourself, you have a stupid, felt figurine do it for you? No thanks," they wrote.

"Hate the ring. And who proposes with both the engagement ring and the wedding band?" asked another.

"I also really despise Elf On The Shelf, their faces annoy me. Honestly hate this whole proposal - I think it's tacky".

A third added: "Ewww to the Elf and eww to the heart ring. Is this proposal to a kid? Gross."

Other members were equally as horrified with the ring choice as they were with the proposal.

"Why do men think we like heart-shaped jewellery?" asked one.

"The Elf On The Shelf should toss it on the nearest yule log and set it ablaze."