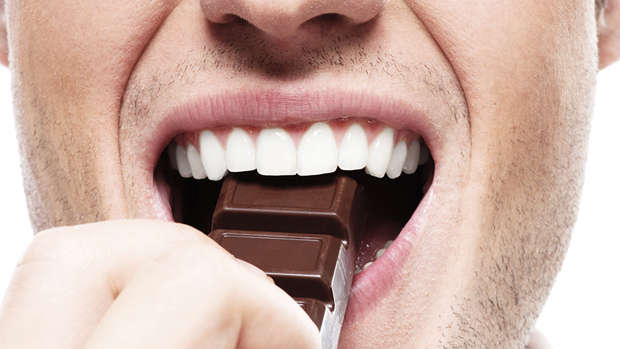 A hormone found in chocolate could be the 'mental Viagra' that helps to get couples in the mood for sex.

Kisspeptin, which is found in chocolate, is the hormone in the brain which kickstarts puberty.

And it may explain something about the behaviour of teenage boys, after scientists found it makes men much more interested in sex and relationships, according to the Daily Mail.

Young men injected with the hormone and then given brain scans showed a flurry of activity in the parts of the brain activated by sexual arousal and romance.

It means similar injections could be used to help men to start a family.

Professor Waljit Dhillo, the lead author of the research from Imperial College London, said: 'Our initial findings are novel and exciting as they indicate that kisspeptin plays a role in stimulating some of the emotions and responses that lead to sex and reproduction.

'Ultimately, we are keen to look into whether kisspeptin could be an effective treatment for psychosexual disorders, and potentially help countless couples who struggle to conceive.'

One in 10 men in the UK are believed to have sexual problems, many suffering a lack of libido caused by relationship issues, stress and anxiety.

This can cause problems for couples trying for a child and advised to have regular sex throughout the month.

But kisspeptin is hoped to hold the answer, following a trial involving 29 healthy young men.

Those injected with kisspeptin, discovered in the mid-1990s in Hershey, Pennsylvania, and named after sweets from the city called Hershey's Chocolate Kisses, reacted differently to sexual and non-sexual romantic pictures of couples.

In an MRI scanner, where their brains were monitored, there was greater activity in the parts of the brain typically activated by sexual arousal and romance than the men given a placebo.

Professor Dhillo said: 'Most of the research and treatment methods for infertility to date have focused on the biological factors that may make it difficult for a couple to conceive naturally.

'These of course play a huge part in reproduction, but the role that the brain and emotional processing play in this process is also very important, and only partially understood.'

The effect is likely to come from kisspeptin's role in starting puberty, by stimulating the release of reproductive hormones.

A study from Edinburgh University previously found it fuels the production of testosterone, which is key to male libido and fertility.

The researchers now want to study how the hormone affects women as well as men, while kisspeptin might also work as an antidepressant.

Volunteers shown negative and fearful emotional faces in pictures said they felt less bad in follow-up questionnaires after receiving the hormone, with less activity in brain structures important in regulating a bad mood.

'This raises the interesting possibility that kisspeptin may have uses in treating psychosexual disorders and depression which are major health problems which often occur together, but further studies would be needed to investigate this.'