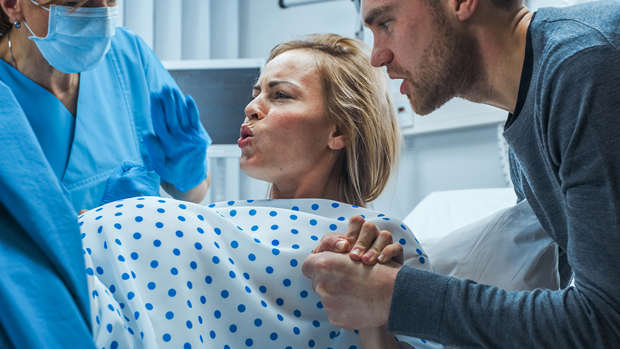 A woman has taken her mother-in-law to court for filming her labour without permission.

The first-time mum says she spent four agonising days in labour but the worst part of it all was caused by her mother-in-law.

"Holy damn those days of labour were hell! I honestly didn't think it could get any worse. I. Was. Wrong," she told Kidspot.

"When we got to the hospital I was already 8cm and was rushed in and rushed to get hooked to the medical devices, my MIL came in two hours later," she added.

The mum said the MIL tried to rush her and threatened to help speed up the birth.

"Everything seemed fine and calm until MIL wanted a cigarette and started to demand I start to push, then she tried to threaten that if I didn't start pushing, she will have to push down on my stomach to force my daughter out."

Nurses reportedly sent the woman outside and she was away for about 40 minutes. However, when she came back, she didn't behave any better.

"I went into labour and I was in the middle of pushing when she ran in, this being my first child and being in labour for so long with no pain meds or rest or food/water I was drained. Pushing was hard as hell and I just wanted to sleep!" the mum recalls.

"Well the moment my daughter was born was the moment I noticed that the entire labour MIL had her phone out and was recording my ENTIRE birth! From my pushing to the stitching process (I tore 100 per cent)," she said.

"I asked my MIL to delete the video, and she promised she did."

A week later, however, she found out the woman still had the video and was showing it to several people.

"It wasn't until a week later when we went to visit her that I found she was showing random strangers this video and many of these strangers were men that she barely knew."

That marked the beginning of a bitter family feud and a legal battle.

"It took going to court to get the video deleted and after that, she wasn't allowed near me nor my daughter."