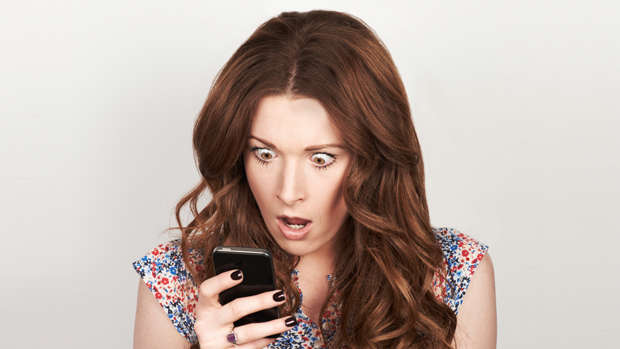 It's a 21st-century nightmare: dashing off a mean-spirited message to a friend about a mutual pal - only to realise you've sent it to the group chat you're all part of by accident.

And one woman on the receiving end of a similar blunder is contemplating ending a 20-year friendship over it, the Daily Mail reports.

The Mumsnet user, known as Purplerain101, revealed that her friend had described her clothes as "hideous" in a message that was clearly intended for someone else's eyes - but had been sent to the group chat used by her and her five closest friends from her school days.

The mother said she felt "c**p" after reading the message, and wondered if their 20-year friendship was over. 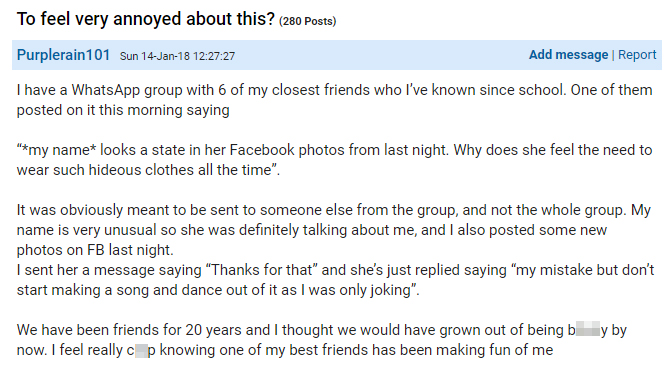 Many Mumsnet users advised her to cut all ties with the sender because the message proved she wasn't a "real" friend.

She said that they had been close for a long time, but expected her to have long left "b****y" comments behind in their teenage years.

The friend had mocked the mother's outfits, saying she look like a "state" in her recent Facebook photos from a night out.

Purplerain101 posted: "It was obviously meant to be sent to someone else from the group, and not the whole group. My name is very unusual so she was definitely talking about me, and I also posted some new photos on FB last night.

"I sent her a message saying 'Thanks for that' and she's just replied saying 'my mistake but don't start making a song and dance out of it as I was only joking'."

She asked other users if their friendship was worth saving, admitting that she felt very hurt by the comment.

Other parents on the thread said their relationship had clearly come to an end as the friend wasn't treating her well.

One commented: "What a b***h, I would consider her an ex-friend now and tell her on the WhatsApp group exactly why!"

"She sounds horrid and isn't a friend at all. She hasn't even apologised to you - because she feels like she has done nothing wrong," another posted.

A third agreed: "A joke is only a joke when everyone finds it funny. She sounds horrible."

The mother later revealed that she had decided to block the friend's number and social media accounts after deciding she couldn't forgive the comments.