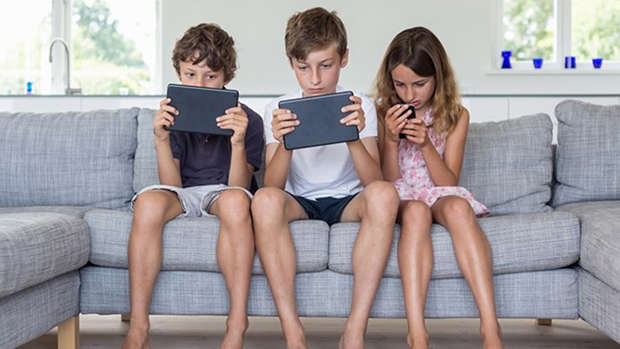 A mum who decided to stop giving her kids screen time has revealed the surprising things that happened once they stopped watching TV.

Blogger and writer Molly DeFrank realised her children's screen time was affecting their behaviour and decided things needed to change.

"It turns out that screens were doing to my children exactly what the studies claimed they were doing: cultivating distracted, grumpy and argumentative little people. Not what I want for my babies who I love more than life," she wrote in a blog post.

We did not stage this photo. . Months ago we removed screen time from our kids. Why? Because my precious babies were acting like demogorgons. And Mama don't play. . We'd only allowed an hour a day, but still, the screens apparently muted their creativity, caused grumpiness, fighting and whining. I was not into it. So we pulled the plug, literally. They protested for a hot minute and then we all moved on. I could not believe how easy it was. Seriously, it was like I had my kids back. . I watched my kids go from screen-dependent to cooperatively playing, creating and even making their own "school." I couldn't believe how easy it was. . Certainly, technology can be useful in its right place...but after a quick assessment of my babies' behavior, I knew we needed a technology overhaul. . A few Saturdays into our screen detox, my kids woke up one by one and saw my husband and I reading in bed. They grabbed their own books and joined us. At restaurants they bring a stack of books instead of propped ipads. My daughter has grown five reading levels in seven months. . I can't recommend a family screen overhaul enough. Have you tried it? What happened?

The family went on "30-day screen detox" which ended up becoming a "lifestyle overhaul" in her home, with five children under the age of 10.

The writer, from California, says the kids took it surprisingly well ... after a while.

"So we told the kids at dinner that screens were no longer an option in our home. After the weeping and gnashing of teeth subsided, guess what? Everyone moved on," she wrote.

"Quitting was shockingly easy, surprisingly sustainable, and my 9-year-old daughter has told me on several occasions that she's glad we've cut them out," the mum added.

As a result, she says her children have started reading more and taking on more creative hobbies.

"My daughter reads books faster than I can buy them, my son has taught family art classes (his idea), and apparently the "go play outside" our mums successfully used on us, STILL WORKS! (If the kids aren't numbed out on screens.)

"My kids play together better, are more creative, more obedient, happier and sleep better. To be sure, they are still human beings and can fight with each other like any siblings. But the change in their attitudes overall was instant, noticeable and for the better," she wrote.

"I watched my kids go from screen-dependent to co-operatively playing, creating and even making their own 'school'. I couldn't believe how easy it was."