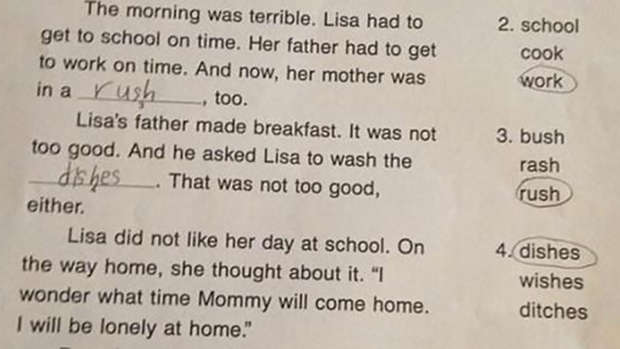 When a mum discovered her daughter's homework included a sexist message against working mothers, she decided to send her own message - by giving it a bit of a rewrite.

Lynne Polvino, 44, of New York had just arrived home and was preparing dinner while fielding unending questions from her 4-year-old son, Jasper, and also helping her six-year-old daughter Hazel, when a particular worksheet caught her eye, Daily Mail reported.

It was a story entitled Back to Work, which included blank sections for the students to fill in certain words. The first line read: "Lisa was not happy. Her mother was back at work." Things didn't get better from there. It went on to describe how: "The morning was terrible. Lisa had to get to school on time. Her father had to get to work on time. And now, her mother was in a rush, too."

It even included a description of the breakfast dad had to make as: "not too good."

The story then has a 'happy' ending where Lisa arrives home to find her mother already home, telling her that she will leave work early every day to be home. "Lisa feels fine now," it concludes.

The worksheet left Lynne flabbergasted, telling Today that her shock after reading the story 'quickly turned to outrage."

"I mean, what decade are we in, anyway?" she said. "In this day and age, we're going to tell kids that mothers working outside the home makes their children and families unhappy? That fathers don't normally do things like cook and wash the dishes?"

So, instead of just allowing her daughter to submit the assignment, Lynne made her own version for Hazel to finish.

Lynne's new version of the story begins with: "Lisa was happy, her mother was back at work. "Before Lisa was born, her mother worked in a big office. Because it valued her important contributions to the workplace, her employer offered nearly a year of paid maternity leave and flex time upon her return."

She also wrote that the father was also at home on paid paternity leave and was "contributing equally to the running of the household."

"Lisa's father made breakfast. It was very good and he had Lisa wash the dishes because all functional humans should learn to clean up after themselves."

It ended with: "Lisa was glad she was growing up in a society free of gender bias and misogyny."

Lynne went on to share the images on Facebook, where they have been shared more than 500 times and gained plenty of praise.

"Yes, love it! I hope when my child is an adult her world looks a lot closer to your rewrite," wrote one user.

Lynne also revealed on the post later that when she alerted the teacher at her daughter's school, she agreed that the worksheet "was outdated" and promised to review such assignments more carefully before sending them.