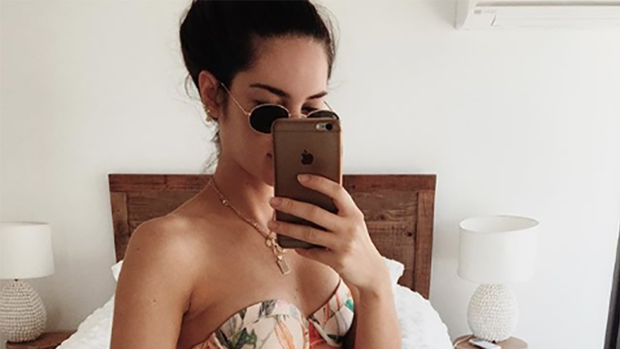 She has a figure most people would envy, but looking at her you'd never guess she was nine months pregnant.

Australian fashion designer Yiota Kouzoukas has made headlines around the world after showing off a tiny baby bump when she's full term in her first pregnancy.

Belly beach day 🧡 I’m going to miss you kicking around in there lil bae! I didn’t understand how people could miss being pregnant but now I get it! #9monthspregnant

After posting photos of her stomach on social media Kouzoukas was flooded with people commenting on her appearance saying "is this for real, your bump looks so small".

Kouzoukas has hit back at the trolls saying she felt she had been forced to reveal "a few things about her body" in the hope that people would be less judgemental.

Overdue bump update!! I’m over #34weekspregnant and have had the most growth during this 8th month🤰🏻Little beb is 5 pounds already! I’ve also had the busiest working period I’ve had in a while so it’s definitely time to slow right down😴 I’ve been M.I.A so haven’t had time to respond to DMs and comments so I’ll be doing a mini vlog answering any pregnancy questions you might have. Leave them below and I’ll make sure to try and answer as many as I can ❤️

Taking to Instagram she explained her past endometriosis surgeries — along with the tilt of her uterus and her naturally taut stomach — made her pregnancy somewhat unnoticeable.

She wrote: "For the first 4 months of my pregnancy, my uterus was retroverted/tilted which means that I was growing backwards into my body rather than outwards.

"Most people with this type of uterus tilt forward at around 12 weeks and continue growing outwards like you normally would.

"My uterus didn’t 'flip forward' until well into being 4 months pregnant because of the backwards tilted position paired with decade old endometriosis scarring that I have on my uterosacral ligaments."

She added: “My torso is also short and my stomach is naturally toned which is keeping my belly super tight, so I’ve had to personally stop all ab exercises to avoid any issues with possible ab separation.”