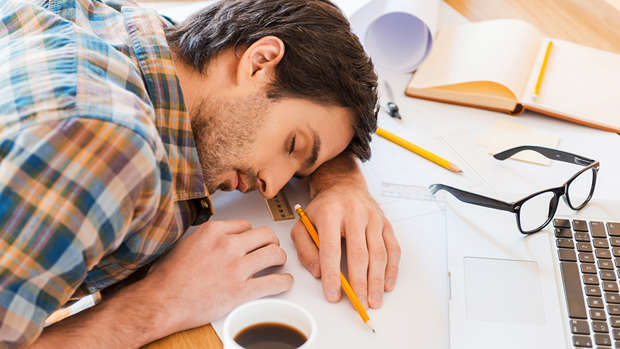 Regularly getting less than six hours sleep a night could cause the same long-term damage as alcohol abuse, according to a worrying new study.

For the body, sleep deprivation results in increased risk of obesity, depression, heart attacks and strokes - causing experts to dub it the "modern ill", the Daily Mail  reports.

However, the most worrying consequences are rooted in the brain and new research suggests the effects are far more destructive than previously thought.

Research suggests that being awake for 18 hours results in the same cognitive impairment people get from being drunk.

This is so severe that driving while sleep deprived could be as dangerous as driving when drunk, researchers found.

Researchers from Quebec-based digital health company Medisys found people who regularly got less than six hours of sleep a night could suffer terrible cumulative health effects they may be oblivious to.

Although the odd night sleeping just six hours or less will not have a significant effect, frequently not sleeping enough is very dangerous, researchers found.

Researchers found your brain becomes less stable for the longer you remain wake - which reduces your attention, ability to focus and use your brain on specific tasks.

Recent reports have suggested 1 in 3 Canadians are chronically sleep-deprived.

The brain 'eats' itself

The news comes on the heels of research that showed having too little sleep causes the brain to eat itself if it hasn't had enough sleep.

In May researchers studied lab mice, and found that 'clean-up' cells were more active in their brains when they were sleep-deprived.

The cells, known as astrocytes, act like mini Hoovers in the brain, sweeping up cells as the brain's connections become weak and break apart.

"We show for the first time that portions of synapses are literally eaten by astrocytes because of sleep loss," lead author Michele Bellesi told New Scientist.

According to the research team at Italy's Marche Polytechnic University, the seemingly alarming process is actually a positive thing.

"They [our synpases] are like old pieces of furniture," Bellesi said. "And so [they] probably need more attention and cleaning."

But he added that sleep-deprived brains showed ominous signs of activity that leads to Alzheimer's.

"We already know that sustained microglial activation has been observed in Alzheimer's and other forms of neurodegeneration," Michele said.

More than half of all adults in the UK struggle to nod off, with 40 per cent saying they regularly get just six hours sleep - considerably less than the recommended seven to nine.