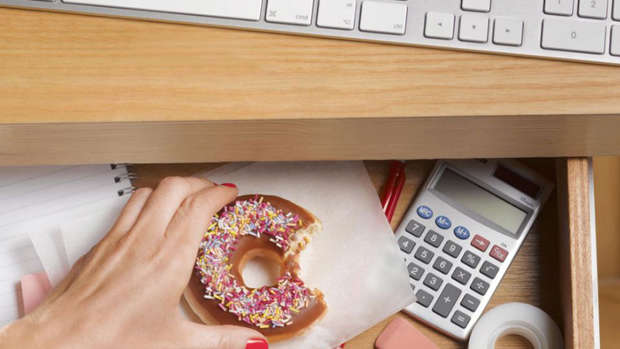 If you've ever felt like sitting at your desk all day could be making you fat, science has just proved you right.

According to a new survey carried out by Kallo, a Dutch rice cake manufacturer, women eat a whopping 100,000 extra calories every year sitting at their desks.

What's even worse is 100,000 calories equates to roughly 50 extra days' food intake every year – which can add up to 12kgs in weight gain!

The survey discovered the average woman will eat 135 biscuits, 90 slices of cake, 90 packets of sweets and 45 doughnuts a year at her desk.

On a typical working day women are indulging in at least three snacks, with the peak time for snacking revealed to be 10:30am and 3:30pm.

Unsurprisingly, Friday is the day we’re most likely to give in to the lure of sugary treats, followed closely by Mondays.

Just over a fifth of female workers confessed they have absolutely no willpower when it comes to office treats, while three in ten say they eat the food purely because it’s there.

A further 48 per cent of women say they are always too hungry to wait until lunch.