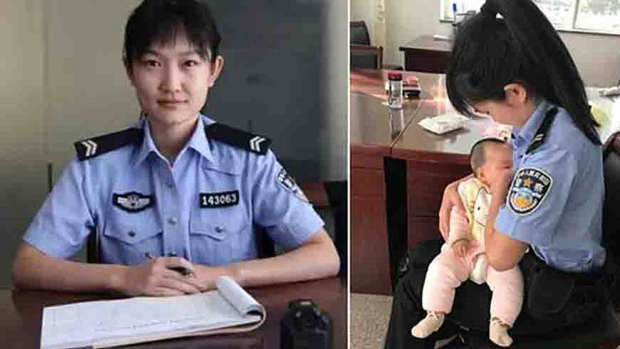 A mother's love is unconditional.

Hao Lina, a police officer in China, has melted the hearts of millions after breastfeeding the four-month-old baby of a suspect.

The infant's mother was attending a trial and could not nurse her crying child. She had given permission to Ms Hao before letting her baby be fed.

The baby's mother was charged with fraudulent fund-raising, illegally absorbing public deposit and crime concealment with 33 other people, according to the court.

Ms Hao, a mother herself, said the baby had been left under her and her colleagues' care before its mother went for the trial, the MailOnline reported. "The baby wouldn't stop crying and we were all worried," said Ms Hao.

"I am a new mother, I could feel how anxious the child's mother would have been. All I thought about was to try my best and comfort the tiny baby."

After gaining the permission of the baby's mother, Ms Hao found a quiet corner in the building and breastfed the baby.

The baby's gender has not been revealed.

The scene was captured by one of Ms Hao's colleagues. The pictures were posted by the court to its official website and social media account before being featured in various Chinese publications.

According to the court, the baby's mother, surnamed Li, was so touched by Ms Hao's behaviour she couldn't help but cry after leaving the court.

Commenting on the praises she had received from the public, a humble Ms Hao said: "I believe every police officer would do the same. If I had been the mother, I would have hoped someone to help my baby too."