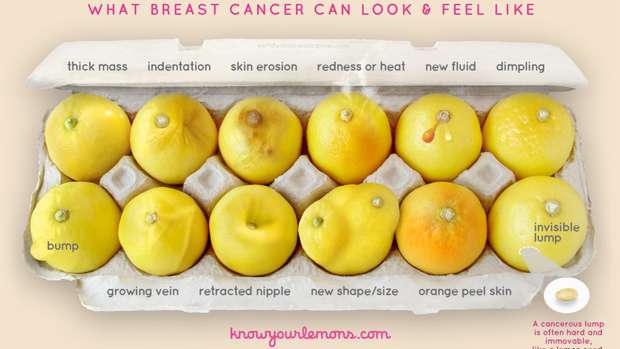 A couple of years ago it was our bra colour. This past week, it's been a red heart.

Over the years, women have used social media to raise awareness about breast cancer. But are red hearts really going to help women spot the signs of breast cancer?

Erin Smith Chieze from San Diego was so frustrated by the Facebook campaign, she shared an image from the charity Worldwide Breast Cancer instead.

The viral image features lemons, vividly depicting what breast cancer can look and feel like.

Erin was prompted to share the image because in 2015, a similar photo alerted her that something was wrong.

'In December of 2015 when I saw an indentation that looked like one of those pictures, I instantly knew I had breast cancer. I tried to feel for a tumor, but my tumor was non palpable.'

Erin was diagnosed with breast cancer five days later, and she found out she had stage 4 cancer the following month.

A heart did nothing for awareness. I knew what breast cancer was. I knew all about self exams, but a picture of what to look for keyed me into knowing I had a terminal disease,' she said.

'We need to give REAL information, not cute hearts. Without having seen a picture randomly with real information, I wouldn't have known what to look for.

'Do us a favour, stop playing games with my life and start truly helping people. Metastatic breast cancer treatment research and real awareness.'

'So if you truly want to help people WITH cancer, or those who will GET cancer, share photos like this one. I wish I remembered who posted the original picture I saw, it truly did make a difference for me.'